Samsung is set to unveil the big-screen Note20 series at its Unpacked event early next month. But before that happens, leaks and rumors have already painted a pretty good picture of how the lineup will shape up. Just a day after detailing the top-tier Note20 Ultra model, WinFuture has now shared almost everything that there is to know about the standard Note20 — a stylus-clad flagship that will lack some of the bells and whistles of the Ultra.

The most striking element of the Note20 is its flat screen, which looks closer to the S10/Note10 Lite than the curved edges of the Note20 Ultra in these renders. Flat screens are thankfully coming back into fashion, and this design choice may well win the Note20 more admirers than its curved bigger brother. However, the screen itself isn’t as feature-packed; Samsung has reportedly gone for a conventional 60Hz, 1080p AMOLED, which isn’t bad by any means, but it isn’t flagship-level either anymore. The report adds that the non-Ultra model will launch in a Mystic Green shade, along with the Mystic Bronze and Mystic Black options we've already seen. Another department that has undergone some cost-cutting is the camera. The Note20 is said to pack a triple camera setup, but it’s going to be a step down from the fancy array on the Ultra. You won’t find the laser autofocus system on the standard model, while the primary sensor settles for 12MP resolution, which means no pixel binning or super high-res shots. The periscope sensor has also been swapped for a 64MP telephoto one that supports 3x optical and 30x digital zoom — likely the reason for that not-so-pronounced camera bump. WinFuture claims that the main camera can take 8K videos, but that isn’t possible on a 12MP sensor, which is good enough only for 4K resolution. So perhaps there's a mixup somewhere with these figures. 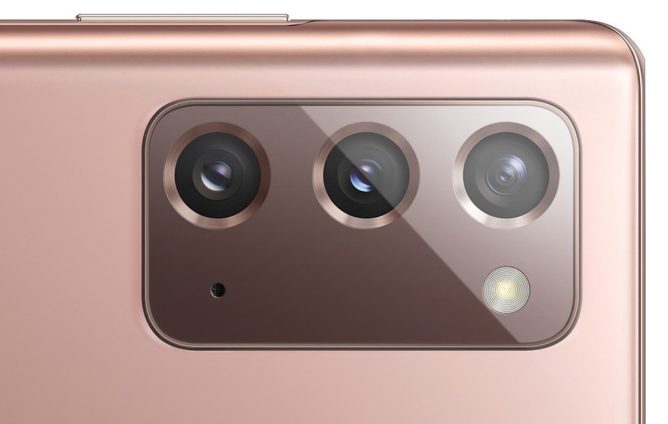 Even though the Note20 has gone for some lower-end parts, it will use the same top-tier Snapdragon 865+ (or Exynos 990 outside the US). Either processor should be 5G-ready and will come paired with 8GB of RAM and 256GB of storage. The handset will pack a 4,300mAh battery and get the same Xbox Gaming Pass and Project xCloud-based gaming features as we expect on the Note20 Ultra. Finally, the S Pen on the Note20 might have a 26ms latency versus the fantastically low 9ms figure of the Ultra — still, that shouldn’t be a deal-breaker.

For any further detail on the Note20 series, including pricing, you’ll probbaly have to wait for the Galaxy Unpacked event that is scheduled for August 5. Samsung has already confirmed that a total of five new products will see the light of day.