Android TV is an open ecosystem with a lot of moving pieces, and that means sometimes bugs show up in unexpected places. Recently, some TiVo customers received startling security warnings about a company called SEI Robotics being granted full access to their Google accounts. Worse, revoking that access (as the notification recommended customers to do) could fully wipe out your smart home setup, removing smart speakers, Nest devices, and other Assistant-compatible hardware and services from your account. Google has since resolved the security warnings, but it sounds like customers that had their smart home setups wiped clean will need to rebuild them.

When the issue was still happening, connecting a new TiVo Stream 4K TV dongle triggered an alert that said a company called "SEI Robotics" has been granted "full access" to your Google account. SEI Robotics is the manufacturer behind plenty of Android TV devices, including the TiVo STream 4K, but most customers probably aren't aware of that fact. 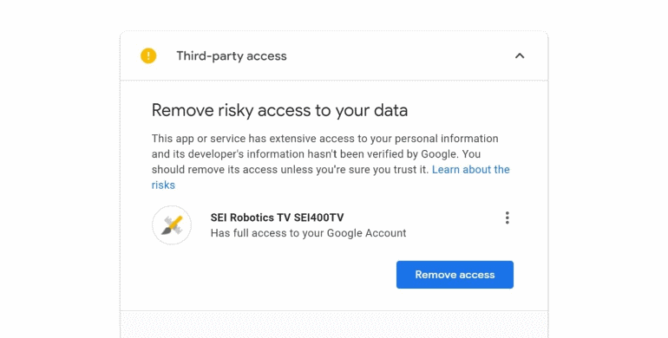 SEI Robotics is just the name of the manufacturer that made the TiVo stick.

In isolation, this was a frightening message to receive, and so it's logical that users would click the big blue button that revokes the access. However, doing so wouldn't just interfere with the proper operation of the Android TV stick, it can also remove all your other Assistant-integrated smart home hardware from your Google account — yikes!

When we originally reported on this issue a few days ago, Google claimed that, contrary to the warning, there was no actual security risk, no user data was being transferred, and a fix was in the works. Based on user reports, the fix has since rolled out, and that big scary third-party access notification won't appear anymore. However, we haven't seen any word from Google when it comes to customers that suffered un-linked Assistant integrations.

We've reached out to Google to see if a solution is in the works for affected customers. In the meantime, the impatient can always resort to the potentially long and tedious re-setup process.

Reader reports claim the third-party access warning has been fixed. Our original coverage also lacked sufficient detail regarding how the issue impacted account-linked hardware and services, and the fact that acting on the notification could cause an account reset. Our coverage has been updated with that information.