In case you somehow slept through the unverified uprising/Great Twitter Hack of Last Week, on July 15th Twitter suffered a substantial security breach that resulted in a large number of verified accounts promoting bitcoin scams. Twitter accounts for Elon Musk, Bill Gates, and Kanye West were affected, plus brand accounts like Apple's. To mitigate the issue, Twitter temporarily locked down all verified accounts for a short period. For around an hour, only unverified accounts could tweet, (though verified accounts could re-tweet). Following the restoration of access and functionality, Twitter's postmortem determined malicious actors gained control of an internal management tool, affecting 130 accounts. 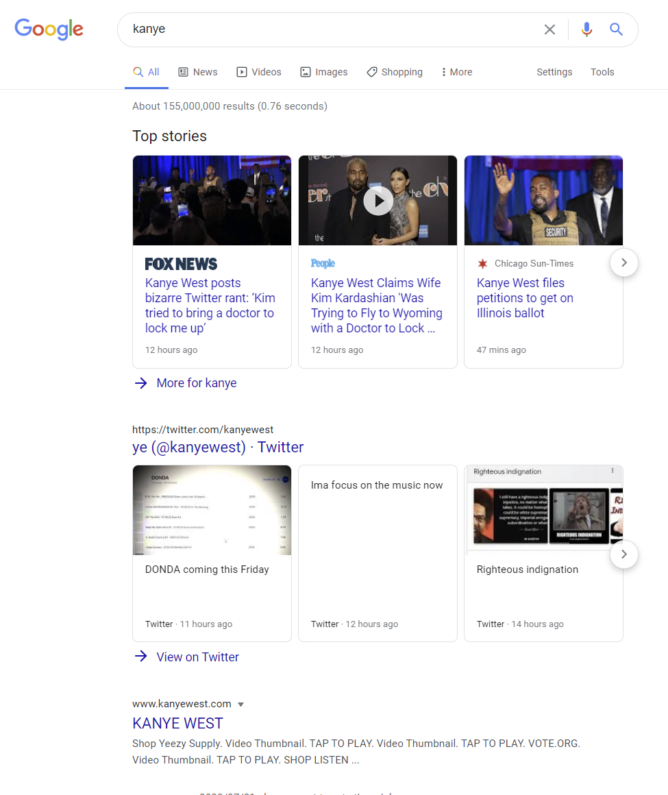 The Twitter carousel appearing in a search for "Kanye."

In the hours that followed the hack, someone at Google must have realized that these scam tweets were being re-promoted in search results. Google Search usually includes recent tweets from some accounts in a carousel for related searches, but that functionality was disabled in the wake of the hack. Google told us that it would bring the carousel back pending a review, and we have to assume that review went well. We can confirm the feature has returned to Google Search, and recent tweets from both brand accounts and celebrities appear in search results again.