Many of Google's most popular apps have received an update with dark mode, but Translate remains an outlier. It's been hanging on to its white-only interface like it previously did to its outdated, first-gen Material Design look. In February, things seemed to be moving ahead with version 6.5 of the app, though they surely didn't go in the right direction. Back then, a dark mode showed up for some users, but it looked like a work in progress or the result of the lowest possible effort. Now, a better-designed dark mode is rolling out again, but once again, it's limited to a few users.

The new dark mode is much more balanced than the one we spotted in February, and doesn't have the same harsh blue tones or unreadable fonts. You can see it in the screenshot below on the left, which was provided to us by tipster José. A few Twitter users (@muznyo and @tsumtsukis) shared similar screenshots too. 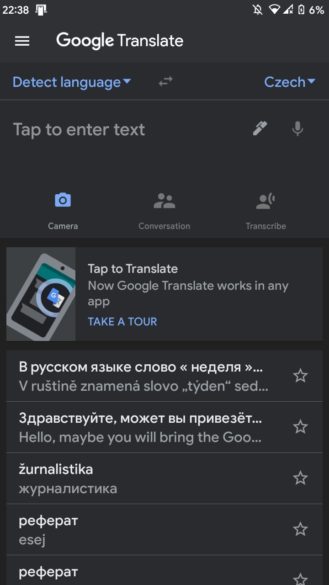 Compared to this, the previous dark mode iteration was quite different and less homogenous. It had a lighter grey scheme in the text entry and translation boxes. The blue colors were all over the place, from a boring pale one for the title bar, to a cyan-like shade for language drop-down arrows, and a darker shade for languages that was nearly unreadable on top of the grey. And there was that dense blue translation results card, which didn't look half bad on its own, but didn't gel well with the rest of the interface. A lot of other unsightly elements were also interspersed in the app.

The eye sore dark mode we spotted in February.

Translate's dark mode officially rolled out to iOS in February, but has yet to come to everyone on Android. Even now, with this most recent server-side test, it's only live for a few users. You can grab the latest version from APK Mirror and hope it triggers it for you, but odds are it won't. Google is on the right track with its newest iteration, though, so I hope it rolls it out to more users soon.

Our tipster, José, spotted a new dark mode design, so we've updated the post to include that.

The Verizon Galaxy Note9 gets updated to One UI 2.1