Noted leaker Ice universe took to Twitter today to post a blurry but official-looking render of the upcoming Galaxy Z Fold 2. While the resolution leaves something to be desired, the image reveals what looks like a bronze colorway and a Note20-like rear camera configuration. It also confirms prior leaks, which claimed it would have a bigger front display when closed.

Although it's not as sharp as it could be, the image clearly shows a much larger front display (visible on the left side of the bottom layer), which stretches further to the top of the phone than the screen on the previous Galaxy Fold did. The rear camera configuration (bottom right) looks like leaks we've already seen for the Galaxy Note20 Ultra. That could be simple consistency in industrial design, but it may hint at similar camera specs between the two.

Other more pedestrian details are also revealed, like grilles for what we assume is a stereo speaker configuration on the top and bottom of the phone (both on the left portion of the folding display, similar to the previous Galaxy Fold), a USB Type-C port on the bottom right, and a smattering of smaller holes for microphones. 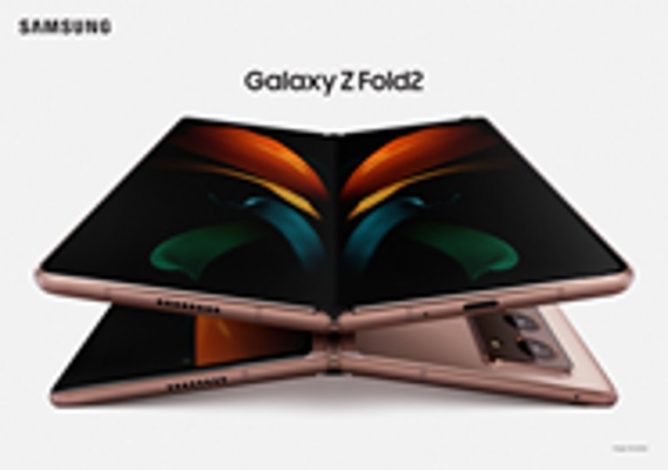 Although it's tough to tell at this resolution, it does look like the folding display goes corner-to-corner, which also confirms previous leaks indicating we'd see an S20 or Z Flip-like hole punch design without the gigantic camera cutout the first Fold had.

As Samsung leak season continues ahead of the anticipated August 5th announcement of the Note20 series, I expect we'll hear more about the Z Fold 2 in the coming weeks — though rumor has it we might have a longer wait for this next iteration of the flagship Fold.