Google used the Pixel 4 to introduce a rethought Google Assistant design sporting new capabilities, but so far, this experience hasn't made it to any other phone. Unfortunately, that's not changing, but an Assistant redesign has popped up on other handsets that takes some cues from the light bar that decorates the bottom of the Pixel 4's screen.

The change (spotted by 9to5Google) currently seems to be in limited testing. It only shows up on a few phones (Pixel 3a and Xiaomi Mi A3 confirmed), and might be tied to the Google app version 11.19.13. The new design replaces the old four lines/dots animation sitting in a pill-shaped box, flanked by Lens and keyboard shortcuts. Instead, there's the transparent bar we know from the Pixel 4, with access to the Assistant updates and to a keyboard in the bottom corners of the screen. A Lens shortcut is also still available — it sits among the tappable voice command suggestions. When you invoke this new Assistant, the sliding up card is slightly shorter and doesn't take up as much space. 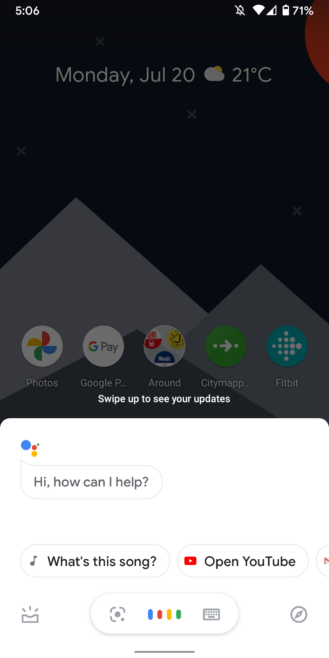 9to5Google could confirm that this is only a visual redesign — the Pixel 4 Assistant remains exclusive to the latest Google Phone. In other phone's settings, the signature Continued Conversation option doesn't show up, which is one of the standout features of the Assistant on the Pixel 4. Nevertheless, Twitter user @PatrikWehovszky, who received the redesign on his Xiaomi Mi A3, says that the Assistant is more responsive and faster, instantly listening when he invokes it via voice. It's possible that while Continued Conversation stays exclusive to the Pixel 4, some other enhancements are finally making their way over to other phones.

The new Google Assistant design on my Mi A3 is looking soo dope. pic.twitter.com/GMVQyJFjSM

Since the new design only shows up for a few people via a server-side switch, there's no sure way to get in on the test. You can try updating to the latest beta build of the Google app, which might help you get in on experiments faster, but there's no guarantee. Get it by signing up for it on the Play Store or by downloading it over at APK Mirror.

SignalWire Work is a fully browser-based Zoom alternative with support for 4K video and 100+ ...