Chrome OS started as little more than a browser, but Google has added Android and Linux app support to give Chromebooks a somewhat respectable software library. You know what's still missing, though? Photoshop. While you can't get Adobe's dominant photo editing tool, there are a number of apps that can do at least part of what Photoshop does. Here are five options you might be able to use in place of Photoshop on a Chromebook.

The GNU Image Manipulation Program (GIMP) is the most full-featured Photoshop alternative available on Chromebooks. However, it's still lacking some of Photoshop's more popular features, and it's a Linux app. Setting up Linux requires a few extra steps, and not all Chromebooks are powerful enough to run GIMP well. First, find the Linux beta toggle in your Chrome OS settings (just search for it). You can install GIMP with the following commands. 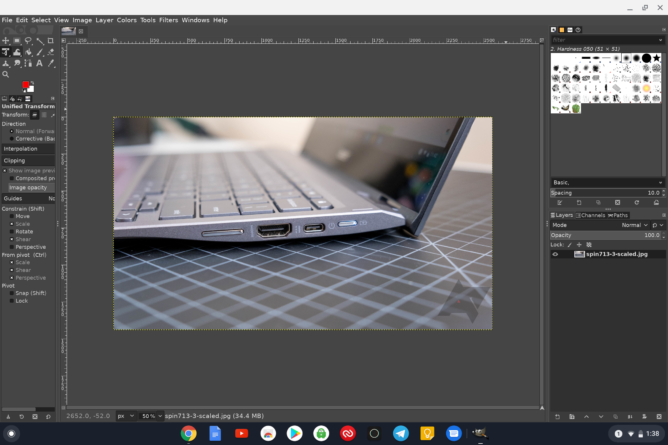 Some newer Chromebooks support GPU acceleration for Linux apps, so you'll want to turn that on if available. GPU acceleration is a flag under chrome://flags/#crostini-gpu-support. GIMP has support for multiple image layers, brushes, filters, transformations, and it can open almost any image format. You might have to unlearn some Photoshop habits, though.

Chrome OS is all about the web, right? So it only makes sense that your photo editing solution lives on the web. Photopea is a surprisingly capable editor you can open in the Chrome browser. 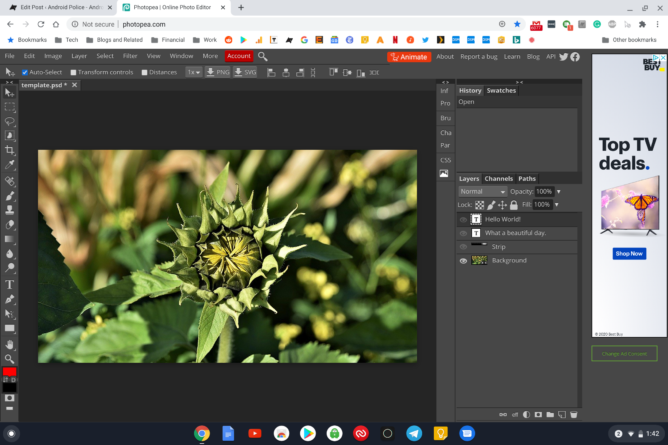 The UI is essentially a clone of Photoshop, but there's less power under the hood. You can control layers, apply filters, use brushes, and even create simple vector graphics. It's free and ad-supported, but you can pay for a premium version ($9 per month) with no ads and more editing history.

At the polar opposite end of the spectrum from GIMP is Snapseed. This is a very limited editing experience because it's an Android app. That means the UI won't be ideal for a keyboard and mouse, but it's easier if your Chromebook has a touchscreen. 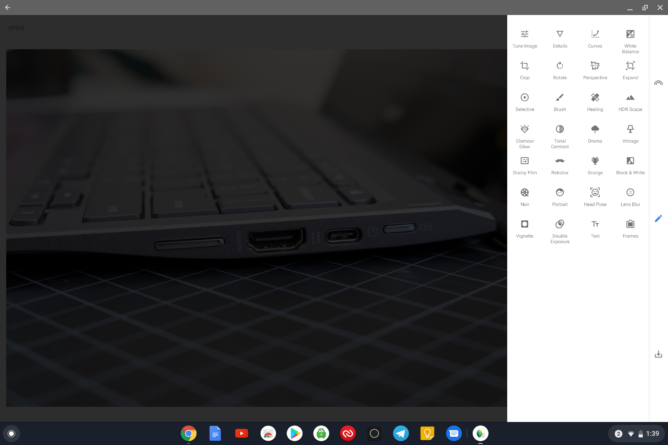 Snapseed might be sufficient if all you need is basic cropping, filters, and image tuning. It even has some RAW file processing capabilities, though not as robust as GIMP or even Polarr. You can get Snapseed from the Play Store, where it's available free of charge.

Pixlr comes in two flavors: E and X. Pixlr X is a simpler application and not much of a Photoshop replacement, but Pixlr E is in the same general category as Photopea. It's an online clone of Photoshop with a healthy but not overly impressive feature set. 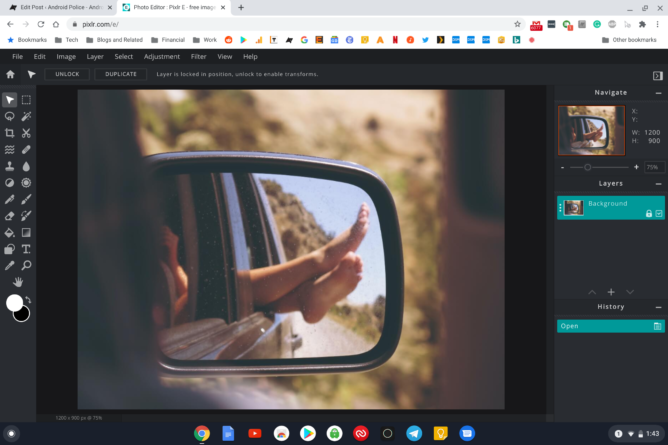 It doesn't have quite as many tools as Photopea, and some of them are locked behind the paywall. That said, it's plenty capable if you just need to tweak an image, shuffle layers, or resize. Pixlr is a bit cheaper than Photopea at the base level. You can get rid of the ads and get more tools for $7.99 per month or $3.99/mo when paid yearly. The professional version ($14.99.mo) includes stock photos, overlays, and more.

Whereas Photopea and Pixlr attempt to imitate Photoshop, Polarr is more akin to Lightroom. So, it's more useful for processing photos than creating new graphics from scratch. It still has many useful editing tools like filters, auto retouching, layers, and numerous image adjustments. The filters are also considered higher quality than the web-based options. However, you only get a few filters in the free version. 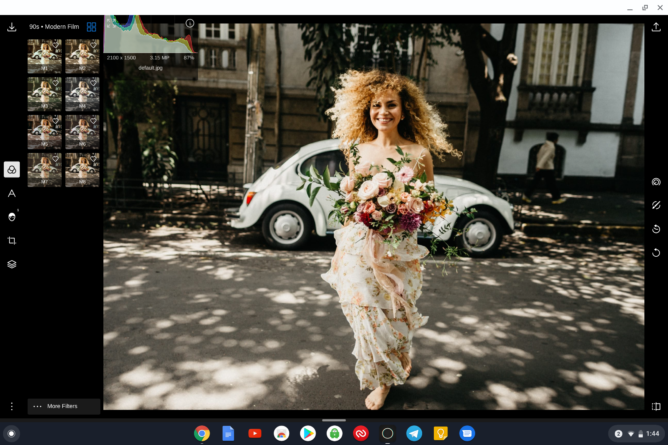 The Pro version has more of those plus masks, perspective control, batch export, and more. It's $3.99 per month and includes access to the full feature set on all platforms: Chrome OS, web, Android, macOS, and Windows.

The 15 best tablet-optimized apps for Android

How to sync your Dropbox or OneDrive files on a Chromebook