Amazon's Fire tablets are popular for one, simple reason: they're really, really cheap. But what happens when you make a slightly-less-cheap Fire tablet? That's the question Amazon sought to answer with the Fire HD 8 Plus, a very-slightly-better version of the new Amazon Fire HD 8 last month, which was already a decent upgrade from previous Fire tablets in both hardware and software.

With the HD 8 Plus, Amazon attempts to bring some quality of life improvements like more RAM and wireless charging—a rarity in any tablet—to the table. Combined with the wireless charging stand that essentially turns the HD 8 Plus into a detachable Echo Show, Amazon has what to date is probably the best version of a combination tablet smart display (even if it's not amazing as either).

If you already read our review of the regular Fire HD 8, most of this section will sound very familiar. The Fire HD 8 Plus has the same design and most of the same hardware as the base model, with only a few subtle differences between the two (I eventually put labels on the back of both tablets so I could tell them apart). 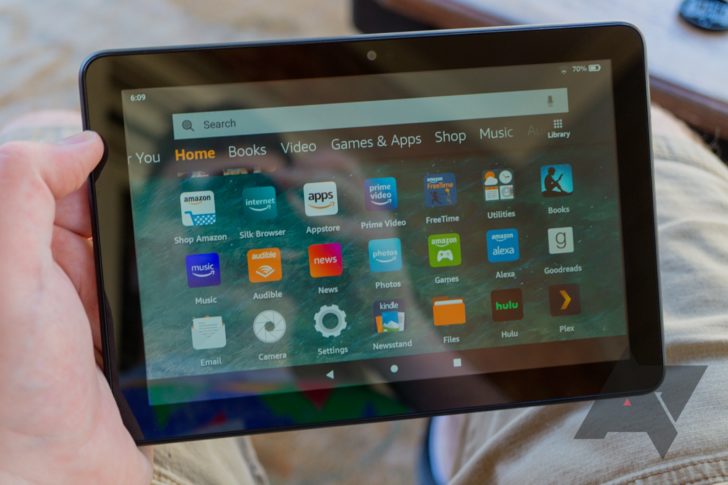 The Fire HD 8 Plus is covered in a soft-touch plastic, which repels fingerprints and other dirt better than the Walmart Onn 8 Pro, but it's also fairly prone to scratches. My unit already has scuffs around the edges. The good news is that there are plenty of cases and screen protectors available for the 8 Plus, including Amazon's own book covers. The HD 8 Plus is the same physical size as the base model, so accessories will work on both models.

If you were hoping the extra $20 would buy you a better screen compared to the base Fire HD 8, I have some bad news for you — this has the same 1280x800 display. The screen still looks fine, with decent colors and minimal light bleed, but it has been seven years since the second-gen Nexus 7 was released with a 1080p screen. Next to that display is the 2MP front-facing camera, which is positioned for landscape mode. 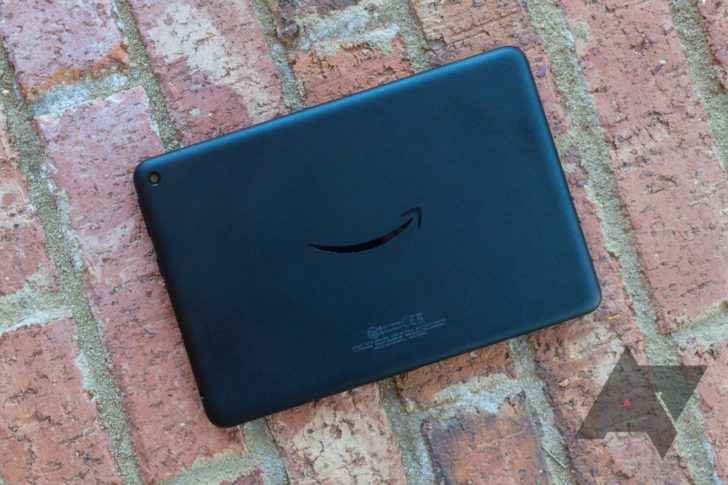 All the tablet's controls, along with the charging connector, are aligned on the right side of the tablet when held in landscape mode. There's a volume rocker, power button, USB Type-C port, and 3.5mm headphone jack. Just like with the regular Fire HD 8, it's easy to accidentally press the power button when feeling for the volume controls. 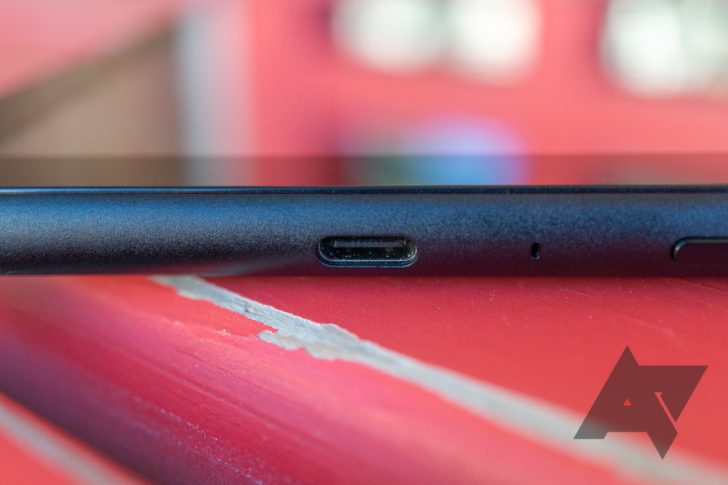 The Fire HD 8 Plus has the same MediaTek MT8168 processor as the base Fire HD 8, as well as the same storage options (32GB or 64GB, with microSD support) and battery capacity (4,850mAh). So what's different, you may ask? First, the Plus  has 3GB RAM instead of 2GB, which means the whole software experience is a little bit faster — more on that later. The other key change is that the Fire HD 8 Plus supports Qi wireless charging, which is certainly unusual for any tablet, much less a budget one. The feature mostly exists for the official dock accessory, which charges the tablet and activates Alexa Show Mode. 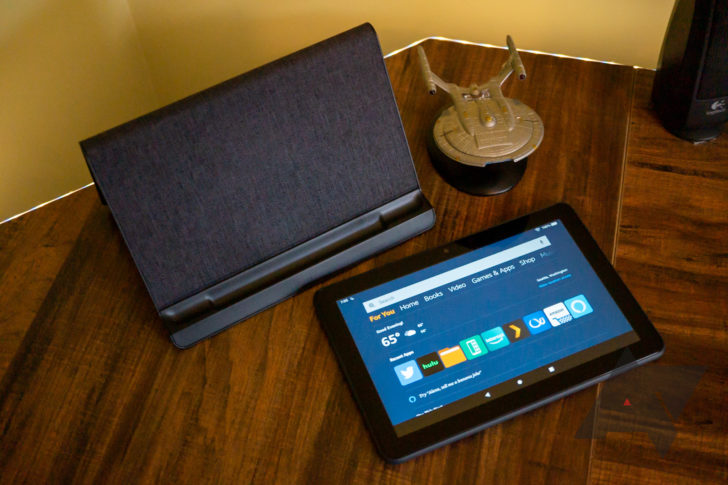 The Fire HD 8 with its charging dock

In the box, you get the tablet, a USB Type-C cable, a 9W power adapter, and a quick start guide. Just like the regular Fire HD 8, the 8 Plus does not support USB Power Delivery or any other method of quick charging.

Just like the regular Fire HD 8 (and its larger cousin, the HD 10), the HD 8 Plus runs a heavily-modified build of Android called Fire OS. There are no pre-installed Google apps or services, but you do get equivalent apps and features — Silk Browser instead of Chrome, Alexa instead of Google Assistant, and so on.

Fire OS is built around content, primarily media served by Amazon. The home screen serves a portal not only to your apps and games, but also your Kindle books, TV shows/movies on Prime Video, audiobooks from Audible, magazines from Kindle Newsstand, and so on. I don't necessarily mind this approach, since if you're buying a Fire tablet, you probably use Amazon.com and possibly other services from the company, too. However, the deep level of integration (to the point where you can't change the launcher) does mean you are always being bombarded with ads. 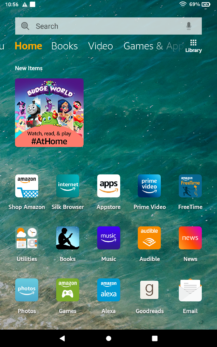 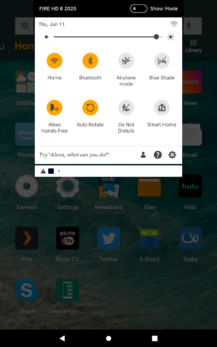 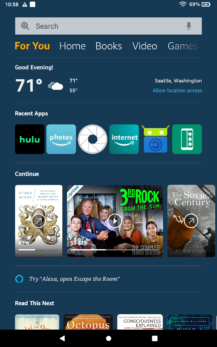 Even though this is based on Android 9 Pie, and it has most of the functionality from stock Android, Amazon has removed some core OS features. There are no app shortcuts in Amazon's launcher, the Quick Settings tiles aren't customizable, and the Autofill service picker is hidden in the Settings (you can use this app to get to it). I don't think there's anything missing that significantly impacts how most people use tablets, but regardless, there's some strange decision-making going on here.

Unlike most Android devices, you get the Amazon Appstore for downloading apps and games instead of the Google Play Store. The general selection is more limited than the Play Store, but most of the major media streaming platforms and communication tools are available, and there of course a lot of games. If you want to check if certain apps are available on the Fire HD 8 before buying it, have a look through the Appstore website. I also installed the F-Droid app store, so I could download a few of my favorite open-source apps that weren't available on Amazon's store. 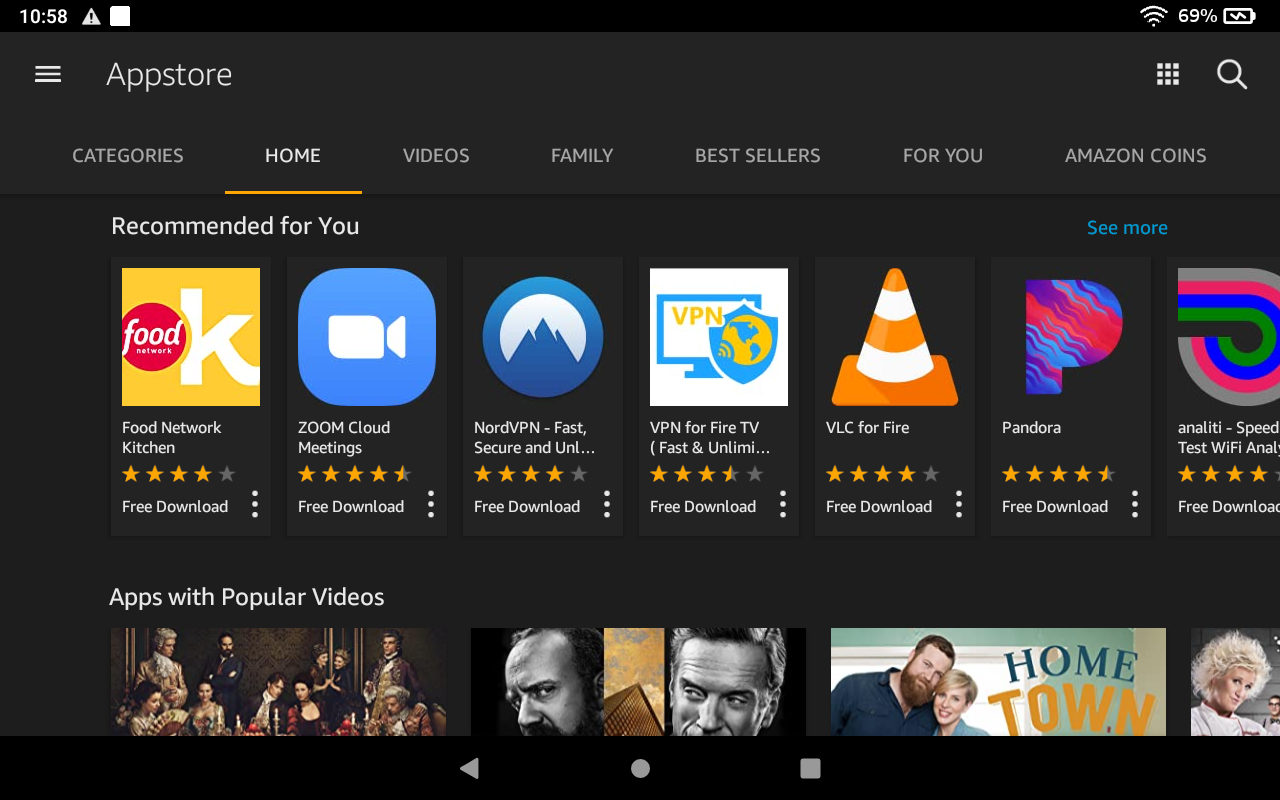 You can still sideload the Play Store in just a few minutes, though, just as you could on previous Fire tablets. We have a guide for that right here, updated with instructions for the new Fire HD 8 series. However, installing the Play Store doesn't instantly turn the Fire OS into a stock Android tablet — you still can't easily access Google Assistant, and the tablet can't be managed using Google Family Link.

If you're giving a Fire tablet to your child, Amazon also has fairly robust parental controls. You can outright block certain apps (like the web browser or camera), or if you want more detailed options, you can create a child profile and set limits using Amazon's FreeTime application. FreeTime even allows restricting content based on the age rating and category, like blocking access to games until the child completes a daily education goal (e.g. reading thirty mins of books or using a teaching app for an hour). 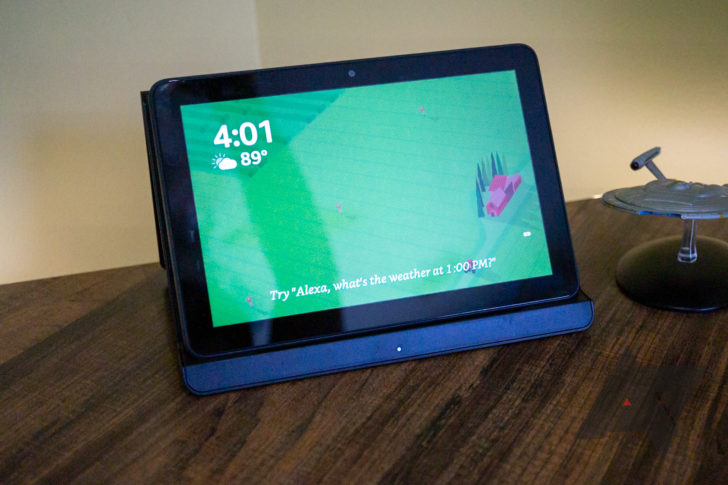 The Fire HD 8 Plus in its charging dock

One of the main selling points for this tablet is it turns into something resembling an Alexa smart display when you slide it into the official wireless charging dock. There are some benefits to this approach — the Fire HD 8 Plus has a larger screen than the Google Nest Hub or Echo Show 5, and you don't need to buy a dedicated smart display — but Show Mode doesn't function exactly like an Echo Show. The interface is vastly simplified, so nearly every action has to be performed using voice commands. Also, I don't think Alexa smart displays are all that great to begin with; the Google Nest Hub has spoiled me with its YouTube and Chromecast support.

The regular Fire HD 8 is already fast enough for a basic tablet, but the HD 8 Plus is ever so slightly faster, thanks to its 3GB RAM. The tablet instantly wakes from sleep when you press the power button, swiping through pages on the home screen is smooth, and apps open fairly quickly. The jump from 2 to 3GB RAM also means you won't be waiting for apps to reload quite as often. 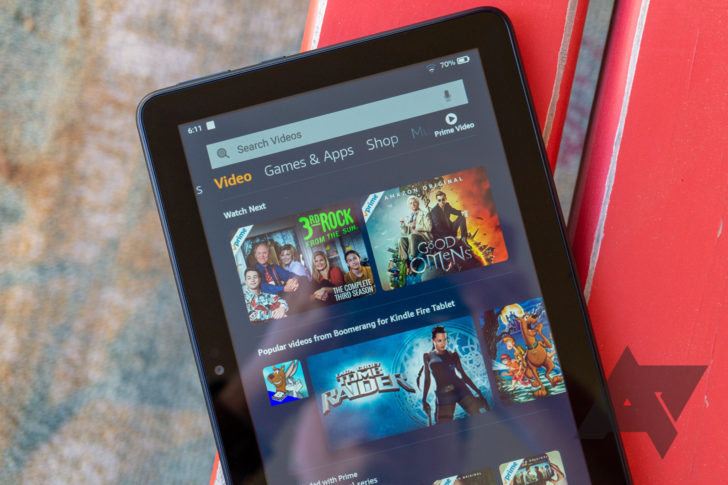 I also didn't have any complaints about battery life. The Fire HD 8 Plus has the same 4,850mAh battery as the regular HD 8, so in my regular use pattern of 1-2 hours of use each day with Netflix/Hulu/Twitter/Plex without recharging at night, I only had to plug in the tablet about twice a week. Games will take a much greater toll on battery life, but that's nothing to sneeze at.

The Fire HD 8 Plus has the same camera setup as the base Fire HD 8 (and the last-gen model from 2018). You get a 2MP shooter on the front, and another 2MP lens on the back.

The front camera is good enough for video calls, as long as you don't cover the microphone like I usually did — Amazon placed it next to the power button. However, the rear camera is fairly terrible. I would have loved to see a rear camera with at least a high enough resolution to scan documents, but that's definitely not the case. Terrible cameras are par for the course with budget tablets, though.

Maybe, if you care about the dock. The base model of the Fire HD 8 Plus is only $20 more than the cheapest Fire HD 8, but if you're already willing to spend $110 on a tablet, you might as well pitch in another $40 and get the Galaxy Tab A 8.0. Samsung's tablet only has 2GB RAM instead of 3GB, but you get a standard build of Android with full support for the Play Store, Assistant, and other Google services — no sideloading necessary.

The Fire HD 8 Plus really only makes sense as a purchase if you want to use it as an Alexa smart display with the $40 wireless charging dock, but the Show Mode isn't as intuitive as a dedicated smart display. On top of that, Show Mode is already available on the cheaper Fire HD 8, you just have to activate it manually by tapping the slider in the Quick Settings.

Ultimately, the Fire HD 8 Plus is a good tablet, but the regular Fire HD 8 is nearly identical and costs $20 less. Save your money and buy the cheaper model, or save up a little more and get something that has the Play Store built-in.

Phone makers are breaking your favorite apps with reckless changes to Android's power ...