Hardware: Flagship, with a few drawbacks

The Galaxy S10e's defining feature, especially going into 2020 and beyond, is that it's one of the smallest Android phones currently available (at least in the United States). At just 142.2 x 69.9 x 7.9 mm (5.60 x 2.75 x 0.31 inches), it's 5 mm shorter than the smallest Pixel 4, and 20mm shorter than the Galaxy S20+. There are novelty devices like the Palm Phone and Unihertz Atom that are even more compact, but those phones are nowhere near as capable as the S10e.

Despite being smaller than every other flagship Android smartphone, the S10e doesn't skimp on features. It has the same Snapdragon 855 processor as the S10, S10+, Note10, and most other high-end Android phones that were released in 2019. There's also plenty of storage and RAM, IP68 water resistance, wireless charging, and a high-quality AMOLED screen. 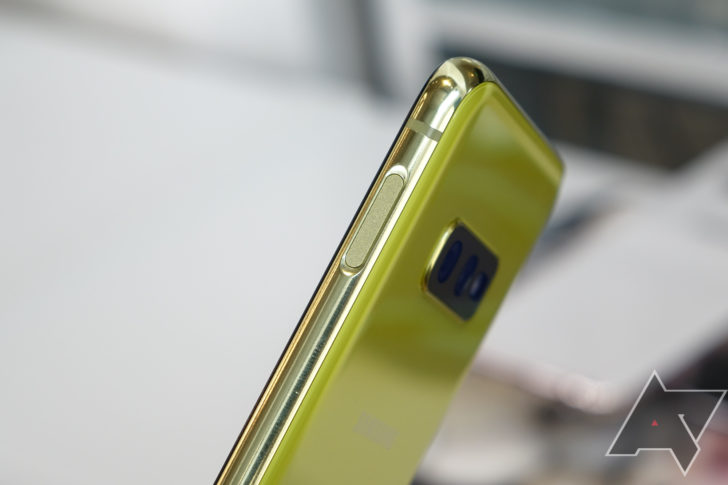 However, there is one area where the S10e falls behind just about every other recent flagship phone: battery life. Compared to the large ~4,000mAh batteries found in the S20, Note10+, and Pixel 4 XL, the 3,100mAh unit in the S10e is definitely limited. There's just not enough room for a large battery in a phone as small as the S10e, and we all remember the last time Samsung tried to cram extra battery capacity into its phones.

The smaller battery capacity means you might have to keep the S10e charged up more often than you would with most other phones, depending on how much you use it each day. Battery degradation will also be more noticeable — you could have to keep the phone plugged in much more often in a year or two. If only smartphones still had user-replaceable batteries! While it's not as much of an issue as battery life, the S10e's cameras also aren't perfect. There are only two rear lenses, a 12MP main and a 16MP ultra-wide. I've certainly been able to take many great photos with the S10e, but Samsung's image processing distorted colors more often than I would have liked — see the last photo in the above gallery for a good example. Low-light is also not the phone's strong suit.

Software: Better than ever

While the Galaxy S10e's compact size and lower price do mean some flagship hardware features aren't possible, the software experience isn't compromised in any way. It shipped with the same Android 9/One UI 1.0 software that the rest of the S10 series had, and since then, it has been updated to Android 10/One UI 2.1. You get everything that Google added in Android 10, plus the handful of additional features Samsung implemented in One UI 2.0/2.1.

I'm mostly a fan of Samsung's One UI skin, since it has plenty of features that I wish were in stock Android (scrolling screenshots, automatic dark mode, and so on). However, the abundance of buttons and switches everywhere in the interface can be a little overwhelming, and Samsung still has duplicates of most Google apps that you can't disable or uninstall. I really don't need two email apps, Samsung.

The only downside is that the Galaxy S10e will likely only receive one more major software update, Android 11, while the S20 series will almost certainly last until Android 12. Galaxy S10e owners will still get security patches for a while after that, at least.

The cheapest Galaxy S10e with 128GB of storage and 6GB RAM is now available for $599.99 from Amazon, Samsung's website, and other retail stores. Sadly, the 256GB model with 8GBR RAM has seemingly been discontinued, and all the fun colors (like the 'Canary Yellow' version seen in the photos here) are also gone. If you want a brand new S10e, you're limited to the base model in black.

I think $600 is a reasonable price for a phone that still has top-end hardware, but it's not as great of a value when compared to larger devices. The base Pixel 4, which isn't that much bigger than the S10e and still has a larger battery and better camera, costs just $80 more (as of the time of writing). The regular Galaxy S20 usually goes for around $850, but it has dropped as low as $750 before — the same as the S10e's original price.