Out of nowhere, Saber Interactive's off-roading simulation game MudRunner has popped up on the Play Store. If you're unfamiliar with the game, it's a sequel of sorts to Spintires, a quirky proof of concept where you drive Soviet-era trucks through heaps of realistic mud. MudRunner offers similar physics-based off-roading gameplay, but it's wrapped up in a much more polished package, and you can pre-register right now for the official Android release planned for July 15th.

If you check out the gameplay video above, you'll get a good sense of what MudRunner will have to offer on mobile. More or less, the sim appears to be a port, with a brand-new UI in the mix for mobile-centric play. So far, details are light, so we don't yet know how the game will be monetized, though the current Play Store listing does mention in-app purchases, even though it doesn't list any prices just yet. Seeing that the game already offers a few expansions on PC, I suppose it stands to reason that these expansions could come to mobile through in-app purchases. What we do know is that the Android port will offer 15 open-world maps and 16 vehicles, which differs from the 19 vehicles in the PC version, and the 30 vehicles in the Nintendo Switch version.

Clearly, MudRunner is something of a niche simulation game, though it's still pretty popular, seeing that's it has sold over a million copies. Honestly, there's no denying that MudRunner is a hoot when you're ripping and tearing through miles of mud in ancient Russian work trucks. So if this sounds like an interesting game to you, feel free to pre-register through the Play Store widget at the bottom of the page to receive a release announcement when MudRunner officially arrives on Android on July 15th.

MudRunner, the off-road trucking game from Saber Interactive and Focus Home Interactive makes its mobile debut on July 15. Coming from a franchise enjoyed by millions on PC, PS4, Xbox One, & Switch, MudRunner can today be pre-ordered on the AppStore, or wishlisted on the Google Play Store. Take a look at today’s screenshots for a first glimpse at the latest addition to the franchise.

MudRunner on handheld devices will be familiar to old-time fans, but new, thanks in part to a brand new GUI. Thanks to its advanced physics engine, players will recognize the realistic, immersive experience they know and love from its predecessors on PC and consoles.

With the same maps and iconic vehicles to master, MudRunner brings the whole world of off-road trucking to your pocket. On July 15, use all the tools and wits at your disposal to conquer its extreme missions through deep mud, slippery roads, and rushing rivers.

MudRunner releases on iOS and Android-compatible devices on July 15. Pre-purchase it on the Apple AppStore and wishlist it on the Google Play Store now! Review codes are available. If you are interested, please fill this form. For more information, please contact:
UK: [email protected]
Rest of the world: [email protected]

MudRunner is officially available on the Play Store 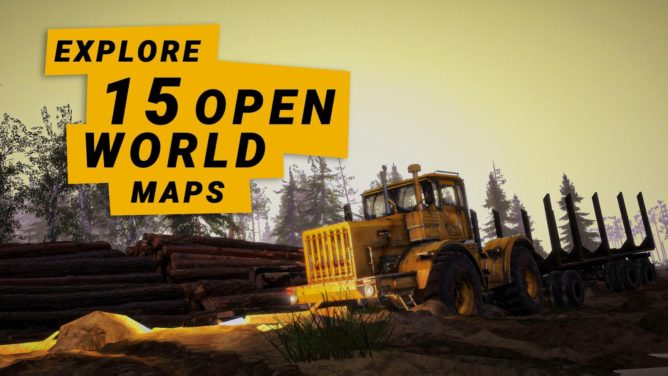 As promised, the off-roading simulation game MudRunner is officially available on the Google Play Store starting today. You can pick it up for $6.99, and while in-app purchases are in the mix, it would appear there is only one in the game so far, and it's for unlocking The Valley DLC, which brings with it 3 new vehicles. Beyond that, the game plays as you would expect, traveling from one location to the next in Soviet-era trucks as you try to complete all sorts of tasks, like operating cranes or delivering cargo, with a heavy dose of driving through realistic mud.

Sadly there is no controller support included, and I checked by testing a SteelSeries Stratus Duo over bluetooth and a Gamevice over USB. Neither work. This means everyone is stuck with touch controls. Worse yet, these touch controls aren't great, thanks to a slow camera that you'll have to adjust manually constantly. It's also apparent that the Shield TV is not supported whatsoever, so forget about playing the Android version of MudRunner on the big screen.

Still, it can be fun to tool around in the mud, and while the game's camera can be irritating, with time, I'm sure people will be able to get used to the game's controls. After all, it's nice to see such a niche series released on mobile, even if it doesn't include controller support like the console and PC versions. So if you're looking for a timewaster that has a slight learning curve, thanks to a wonky camera, then MudRunner may be a solid pickup. So if you'd like to purchase the game to try it for yourself, you can do so through the Play Store widget linked below.