The unpronounceable Sony WH-1000XM3 active-noise canceling headphones may be getting a little long in the tooth with a successor landing soon, but that doesn't make one of the best Bluetooth headphones any worse — they're still a great choice. If you've been eyeing these to escape the noise surrounding you while you work from home, today might be your chance to grab them for cheap. They're available as Woot's deal of the day for just $220, which is the lowest we've ever seen (ignoring refurbs, that is).

As our own Richard Gao said in his review of the Bluetooth headphones, the set "looks good, sounds amazing, and its active noise cancellation can transform even the noisiest of environments into a library." The price and the finicky touch controls were among his only complaints, though the first point is moot at $220, which is 130 off the $350 MSRP. Once the pandemic blows over, the WH-1000XM3 will also be great when you're out and about: It offers up to 30h of battery life on a Bluetooth connection, charges over USB-C, and can be folded to fit a bag more comfortable. When you're at home, you can connect it via a headphone jack, regardless of its battery's state. 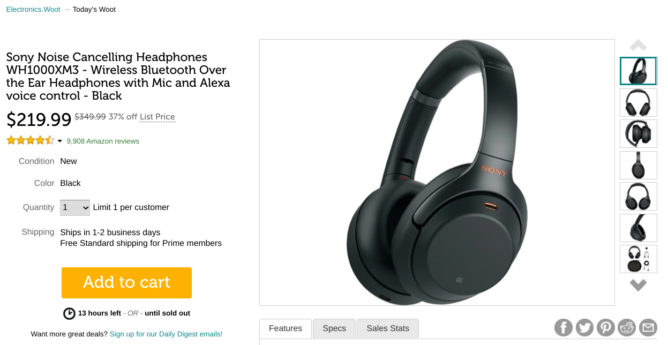 To secure your WH-1000XM3 unit, you should act fast: The headphones are Woot's deal of the day, which means they should be available until midnight, but if stock runs out before then, you still won't be able to get your hands on them.

OnePlus Nord all but fully revealed in MKBHD video