For the first few years, Chromebooks were only worth buying if they were cheap as dirt. As Chrome OS has improved, so has the hardware. While Chrome OS is still more limited than Windows or macOS, there's an argument to be made for a nicer piece of hardware running Google's software. Not too nice, though. Chromebooks like the Pixelbook or Galaxy Chromebook are too expensive to be genuinely competitive. The Spin 713, on the other hand, is priced just right.

The Acer Chromebook Spin 713 has great specs and features, but the price doesn't get too far into "good Windows laptop territory." At $629, the Spin 713 is a fantastic value with a 360-degree convertible hinge, a high-resolution 3:2 touchscreen, and a 10th Gen Intel CPU.

The Spin 713 is an unassuming laptop—it's not as flashy as a device like the Galaxy Chromebook, but it doesn't look as cheap as the IdeaPad 3. Most of the chassis is aluminum, but both the top and bottom have a bead-blasted finish that seems slightly unusual to me. The effect is more matte than I expected, and it can look like plastic from a distance. It's very rigid when closed, but the keyboard frame and deck are plastic, which is a part of the laptop you'll interact with often. This keeps the build from feeling truly high-end. The speakers are on the underside, and they're fine for voice and maybe music if you're not picky. You have to spend a lot more than $630 to get laptop speakers that are actually good. 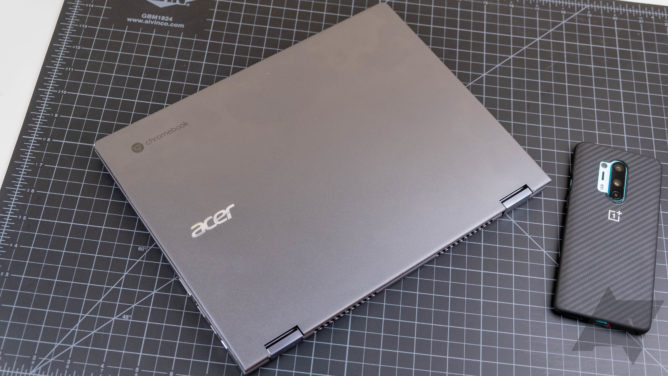 I'll talk more about performance later, but all you need to know right now is that the Spin 713 has an Intel Core i5 10210U (Comet Lake) CPU. This 10th Gen Intel Core processor has a higher TDP than most Chromebook CPUs, meaning Acer has a fan whirring away to keep the computer cool. The vents are on the bottom, and they need to remain free of obstructions. I prefer fanless designs on laptops so I don't have to deal with the noise and vents. That said, the noise isn't too bad here. I've only noticed it in very quiet rooms. 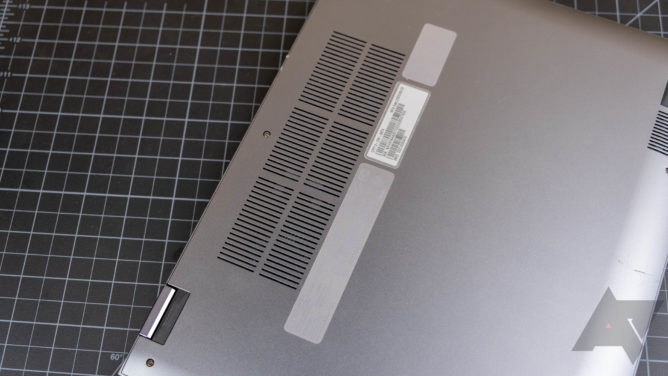 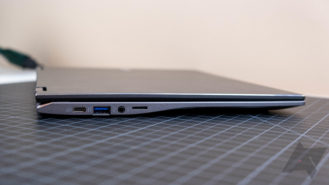 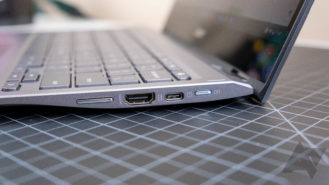 Personally, I won't buy expensive devices that don't charge over USB-C right now, and I wouldn't recommend you do, either. The Spin 713 checks that box and then some by charging over either of its USB-C ports. They're on opposite sides of the laptop, which is convenient when you need to juice up in an unfamiliar environment. The laptop maxes out at 45W with a suitable USB-PD adapter (it comes with one, and that's the only accessory in the box), and those ports are also USB 3.1 with support for 5Gbps data speeds. Acer also threw in an older USB-A (3.0), a microSD card slot, a headphone jack, and an HDMI port. This is an excellent selection of ports for any laptop, let alone a mid-range Chromebook.

As mentioned above, this is a convertible laptop, allowing the screen to flip all the way back so you can use it in different modes. This is something I look for in a laptop because I like to put it in "stand mode" to plug in real keyboards. It can also be a tablet (folded all the way), or you can prop it up on a table like a tent. Regardless of whether or not you use the convertible features, you'll have to keep an eye on that hinge. I found it to be a little on the loose side—too much jostling, and the screen will sag one way or the other. 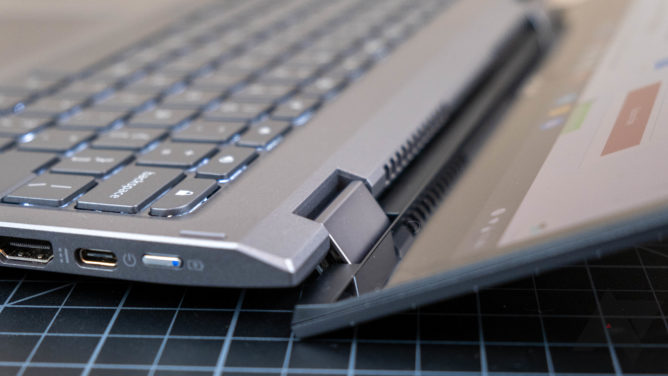 The touchscreen display is one of the best things about the Spin 713. It's got a 13.5-inch 2256x1504 IPS LCD, which if you're counting, is a square-ish 3:2 aspect ratio like the Pixelbook. This shape is a much better use of screen real estate on a laptop compared to widescreen 16:9 and 16:10 ratios. It lets you see more of a webpage or document without scrolling, but the drawback is larger black bars when watching video. The panel itself has vibrant colors, no light bleed, and almost perfect viewing angles. It's bright enough to use in sunny areas, but the Gorilla Glass cover is quite reflective. Still, coming from an IdeaPad 3 as my most recent "sitting on the couch computer," the screen quality was a real delight.

I'm admittedly very picky about keyboards—the Pixelbook has one of the few laptop keyboards that I actually like using. The Spin 713 keyboard isn't "Pixelbook good," but it's not terrible, either. The keyboard is backlit, and the layout is the same as every other recent Chromebook (and this is fine). The keys seem to have more travel than many laptop keyboards, which I like. They also have good tactility but don't feel as "distinct" as the Pixelbook's keys. Add to that, the plastic keyboard deck introduces a bit of flex. The resulting mushy landing slows me down and even produced a handful of double presses. But yes, I'm a very heavy typist who's used to much more key travel than you typically get on a laptop. Most people will be happy with this keyboard, even though it's not a best-in-class experience. 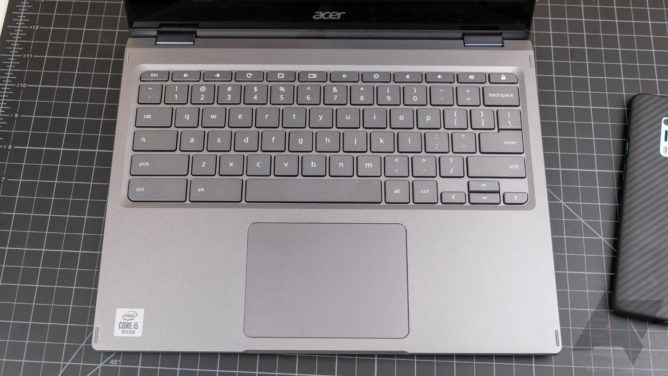 The trackpad fares a bit better in my personal torture test. It's big and covered in Gorilla Glass, with above-average smoothness and accuracy. The click mechanism feels sturdy, and it actuates correctly even if you press farther up on the trackpad. On cheaper laptops, the trackpad feel is often inconsistent. This is overall one of the better trackpads I've used on a Chromebook.

The Spin 713 comes with one of several 10th Gen (Comet Lake) Intel CPUs. In the US, the only SKU currently available sports the Core i5 10210U, which would be plenty fast for a full Windows machine loaded down with software and background services. The CPU is a 15W design, which requires a fan. I would prefer a lower-power fanless design for a Chromebook, but the upshot here is that you get four cores and eight threads with a 1.6GHz clock—it's a very fast Chromebook. Too many Chromebooks still come with 4GB of RAM, but this one has 8GB. That's the sweet spot for Chrome OS as it doesn't add too much to the price but still allows you to go pretty nuts with tabs. I've thrown everything I can at the Spin 713, and it's remained snappy throughout my testing. Keep in mind, of course, that my workflow is very productivity-oriented.

Here are a couple of benchmarks to illustrate the speed, if that's your thing.

The Chrome OS story is unchanged here—the Acer Spin 713 has access to Android apps and Linux packages in addition to Chrome's extension and web app ecosystem. This is plenty of software for basic tasks, but I miss things like Photoshop when I'm hunkered down with a Chromebook. The payoff for shoehorning a complicated Linux solution in to fill the gaps isn't there for me. Some of my colleagues have come to dislike Chrome OS' scattershot approach to computing, but I'm not quite in that camp. I like Chrome OS for what it is, but I could never make it my primary computer.

The awesome battery life is one of the things that keeps me coming back to Chrome OS. The Spin 713 is a high-power machine, so the quoted 10-hour battery life is somewhat less than a lot of Chromebooks. I'm seeing around seven or eight hours of usage per charge, and that's with a fair bit of standby time mixed in. I did encounter one instance of suspiciously high battery drain in sleep mode, but it never reoccurred and could have been related to something I did. This isn't a device you should buy specifically for longevity, but it does well enough that I wouldn't call this a notable drawback.

Yes, if you need a powerful Chrome OS device and don't mind a few minor compromises. It's nice to use a Chromebook with a robust CPU and enough RAM to handle all my tabs again. The Spin 713 tears through my Chrome OS workloads, and I've even been able to toss a few Linux apps in the mix without issue. The high-resolution LCD looks very sharp and vibrant in most lighting conditions, and the 3:2 screen ratio is also a big plus (for me, but I'm objectively right about this).

A substantial number of people looking at Chromebooks will do fine with a cheaper unit like the Lenovo IdeaPad Flex 5 or C340. Comparatively few users need a premium device like the Galaxy Chromebook. The Spin 713 sits squarely in the middle—it cuts the right corners to keep the price low while offering excellent performance and features that make it stand out. 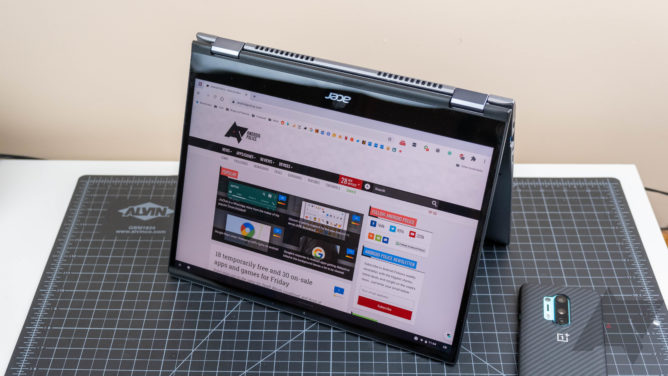 There isn't much to complain about here, but I don't love the fan on the underside, and the hinge could be a little tighter. The plastic keyboard surround also makes the keys feel a bit mushy. That's not enough to make me dislike the Spin 713 (and I don't hate typing on it). It's a great Chromebook for a great price, so it's earned a Most Wanted award from AP.

You want a powerful Chromebook without breaking the bank.

You need a computer that does more than Chrome OS can manage, or conversely, a cheap Chromebook will do the job.