Wink recently caused an uproar when it launched a mandatory subscription plan out of nowhere, hindering anyone unwilling to pay from controlling their smart home hubs after a meager 14-day heads-up. The troubled company since backtracked and gave an indefinite extension of its free service, but of course, the business still wants to tap into a recurring income stream. It has announced that the $4.99-a-month subscription will become mandatory starting July 27, though this time around, free users will be able to retain some extremely limited functionality — if you even want to call it that.

Wink says that users who do not subscribe will retain local control over select devices, "such as those found in the Lights + Power menu, as well as Z-Wave connected Locks." The list of features that won't be available to those who don't pay the fee is much longer, though, and includes essentials like voice control, shortcuts, adding devices, and editing names: 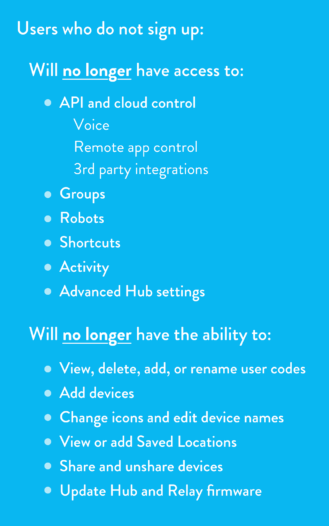 I understand that it's important for Wink to move to a subscription model, but the company handled the transition anything but well. Instead of offering subscription customers unique new features, Wink decided to move everything behind a paywall, which understandably causes a customer uproar. The latest display of goodwill also feels like nothing but a PR move, as the limitations of the free service are laughable: You won't even be able to edit device names, let alone add new ones.

This goes to show once more that smart home devices relying solely on the cloud can't be the way forward. We need hubs that process essential features locally and offline so they won't stop working altogether when manufacturers go bankrupt or change business model.

Logitech’s voice-controlled Harmony Express is being discontinued, will stop working in September