We've known that Android 11 plans to integrate smart home controls into the long-press power menu, building on the wallet functionality it already added, and we've even seen mockups for what it will look like. But today we've received a report of the change live and in the wild on a Pixel running Android 11 DP4, and it turns out, anyone on Android 11 can enable it by sideloading the latest Google Home app release.

Screenshots of smart home controls in the power menu.

We've had the chance to play with the new interface for ourselves, and it works pretty well. The name of the home appears top center next to a Google Home icon, with a three-dot overflow menu to the right and the Quick Control tiles themselves below. You can tap for binary on/off controls, and lights that support multiple light levels do so via a drag left and right on the tile.

A further control customization menu appears via the three-dot menu to the right of the home label, under "add controls." There, all my Assistant-integrated devices that appear in the Home app are present to add to the Quick Control shortcuts by tapping a star-shaped favorite icon, including my robotic vacuum, Android TV, Harmony macros, and smart lights.

Our tipster says everything is "working flawlessly" when it comes to the new integrations, and it does for me as well.

To enable this for yourself, you'll need a Pixel running Android 11 together with the latest version of the Google Home app, v 2.23.1.8. We've tested it on Android 11 DP4, but it may also work on other versions, and it explicitly doesn't work on Android 10. You can download this latest version of the app from APK Mirror, our sister site, but you'll need the APK Mirror app to install it, since it makes use of App Bundles. If you're not familiar with that, we have a walkthrough on how to use it here.

While all my smart home stuff works, I have a relatively limited setup. AP's Artem Russakovskii reports that his cameras and thermostats also work, though they require a slightly unintuitive long-press for some functionality.

It's a little curious that this feature works on DP4, and that all it required to get it to work was a single app update. Yesterday, Google rolled out the first Android 11 Beta release to a handful of folks, perhaps accidentally, given the company previously said the release would be delayed. But apparently, all the functionality required for the Home app update to add the power menu smart home controls it is present already on DP4.

The first Android 11 Beta was made available yesterday for Pixel devices, adding polish to some of the new features that arrived in the developer previews. The power button menu controls were functional in DP4, but they work better now in the Beta. For things like lights, single taps for state changes and sliding left and right for brightness work as they did before, but long presses no longer throw you into the Home app. Instead, a modal bottom sheet appears with the additional options (like colors for lights or other controls that might be necessary for certain smart devices like a thermostat or robot vacuum). The little button in the top right of the sheet now takes you to the Home app if you need to go there for anything more. Single taps for cameras didn't work before, but now they instantly bring up a modal with your camera feed — no need to long-press for this one.

Robbie is the name of my robot vacuum, in case you wondered.

It's still not perfect — there's an annoying lag while the buttons figure out the current state of lights and other devices which means I'm left staring at a "Loading..." label on each one for varying amounts of time (well over a second in some cases). This happens even if I've just opened up the power button menu a few seconds ago. It makes sense that it would have to refresh the list on opening, but it should probably be a lot faster, and not showing anything instead of the loading label would be less distracting, arguably. Let's hope Google tidies this up in subsequent Betas.

Another potentially frustrating aspect of this is that the toggle won't function unless your phone is unlocked. You can choose whether or not the controls display when your phone is locked, but there's no option to make them functional when you're still locked. This isn't a huge problem for me with the Pixel 4 since I use face unlock which works in the background. But on a device with a less convenient unlocking method, you might try a toggle and then be asked to unlock before having to hit the toggle again — all of which betrays the convenience somewhat. It's possible that Google will change the way this operates before we get to the stable version of Android 11, and I hope so. At least let us choose.

It's also been pointed out that the lockdown button is hidden behind the three-dot overflow menu on this screen, which is a little odd since it's supposed to be easy and fast to reach for if a situation demands it. There's plenty of room for four icons in that top section so it would make sense for Google to add lockdown so it's easier to get to. 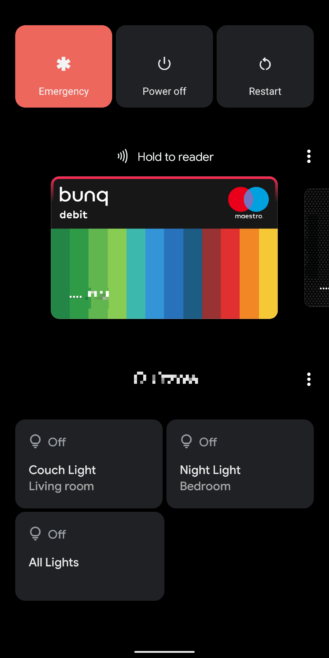 Android 11 Beta 2 brings another edit to the power menu stack, but this time, we're going up to the top. Vital controls have been condensed from four down to three with Emergency contact anchoring the left side.

For most users, Power off and Restart take on the center and right buttons. If a user enables the Lockdown option in their system settings, the above two settings move to a menu that comes with a new Power button — note the hinted overflow cue below the power icon. If you have turned on bug reporting via the power menu, that option gets relegated to a separate overflow menu in the three-dot button on the far-right.