Alongside Slack, Google Meet, and Zoom, Microsoft Teams has quickly become one of the go-to solutions for remote working and living, connecting coworkers and friends in times of social distancing. Microsoft recognizes this and is pouring a ton of resources into the service, having only recently introduced a personal version of the platform for Android. In a blog post today, Microsoft announced a whole slew of updates for all of its Teams users, including a snazzy new Together Mode that digitally recreates meetings, classrooms, and auditoriums to make people feel more connected. It's also launching smart displays running Cortana and Teams.

Together Mode for virtual get-togethers

Microsoft describes Together Mode as a new take on online meetings that places participants into digital environments, which is supposed to make them feel just a bit as though they shared the same room. That's achieved by AI segmentation automatically cutting people out from their real-life backgrounds. Microsoft hopes that this will make meetings feel more natural and will help participants focus on non-verbal cues. The first background to roll out starting in August will be an auditorium, pictured above. Other places, like roundtables or coffee shops, will follow later.

Enhancements to regular conference calls and suggested replies in chats

Other than this brand-new feature, Microsoft is working on refining regular video chats. It's introducing video filters, letting you adjust brightness and blur your background before you join meetings. There's also a new dynamic view for conferences, which allows you to choose how many participants you want to see at a time and how big the PowerPoint slide or the shared screen everyone's looking at is supposed to be. To make meetings less noisy, the company is also working on emoji reactions, looking pretty similar to those you see in Periscope live streams.

Like Google, Microsoft is trying to make its software as inclusive as possible and will add live captions with speaker attributions to Teams. These will automatically be saved as transcripts, so it's easier to reference older meetings.

We already know suggested replies from Android and Google's Messages app, and Microsoft seems to think these are a good idea in Outlook, too. The next stop for suggested replies is Teams, where the company will start rolling out the feature this month. 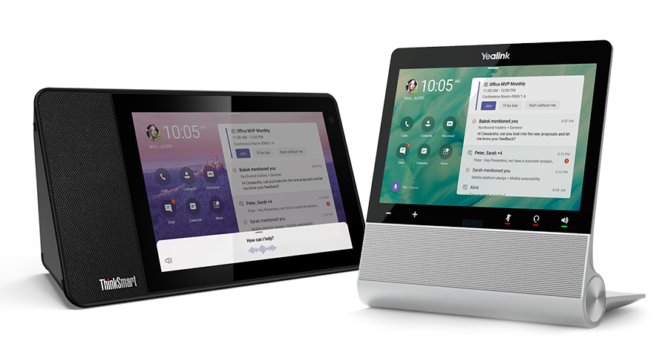 Microsoft is also getting into the smart display game, though it's focussing solely on businesses, a place Google and Amazon haven't conquered yet. It has announced two Microsoft Teams displays from Lenovo and Yealink, the former looking suspiciously similar to Lenovo's 2018 Google Assistant-equipped Smart Display (It's almost certainly based on the same hardware). It costs $350, which makes it all but clear that it's targeted at businesses. These devices will function as video-conferencing tools, team chat portals, desktop display extensions, and a means to talk to Cortana.

Of course, many of these features are targeted at businesses, but it's still interesting to see how Microsoft is trying to conquer the business world with pretty much the same apps and devices Google and Amazon have successfully brought to consumers. And virtual classrooms and auditoriums may be here to stay for a while for students and kids.