After limited and ultimately abandoned experiments with a native screen recorder in Android 10 betas, Android 11 seems to be poised to ship with one. Compared to third-party screen recorders, the built-in solution used to come with one big caveat, though: It couldn't record internal device audio. That's thankfully changing with Android 11 Beta 2, as the recorder finally adds a dropdown that lets you choose from which source you want to record.

Previously, the Android 11 recorder displayed two toggles when you start it via its quick tile: Record microphone audio and show touches on screen. Beta 2 enhances the audio selector with a dropdown, letting you choose between mic sound, device audio, or a mix of the two. 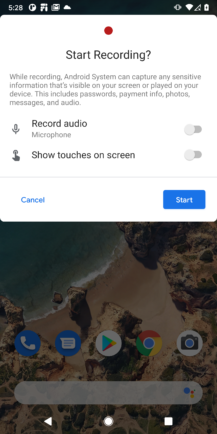 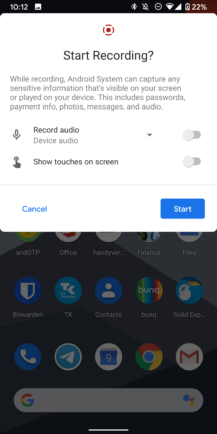 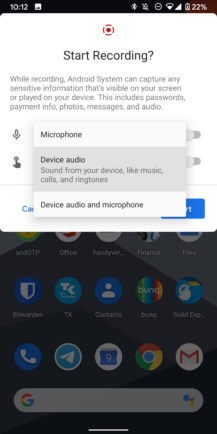 Some people on Reddit have already noticed that in contrast to some other OEM screen recorders, Android 11's solution still won't record audio in some apps. That's because Google's implementation relies on Android 10's AudioPlaybackCapture API. The interface allows screen recorders and accessibility services like Live Caption to pick up audio from other apps (which hasn't been possible in Android 7 through 9), but it also gives developers the power to block these recordings. That's useful for streaming services that don't want their content to be ripped off. However, apps that want to support recordings have to be updated to target the respective Android 10 API level or opt into the feature if they still target Android 9 Pie, among other requirements. Thus, a good chunk of developers haven't enabled it yet.

So there you have it: If you're on Android 11, you might finally be able to ditch your third-party screen recorder in favor of Google's, as long as you don't rely on advanced features like custom bitrates, resolutions, and a built-in video editor.

Microsoft Team's Together Mode puts you in a virtual auditorium