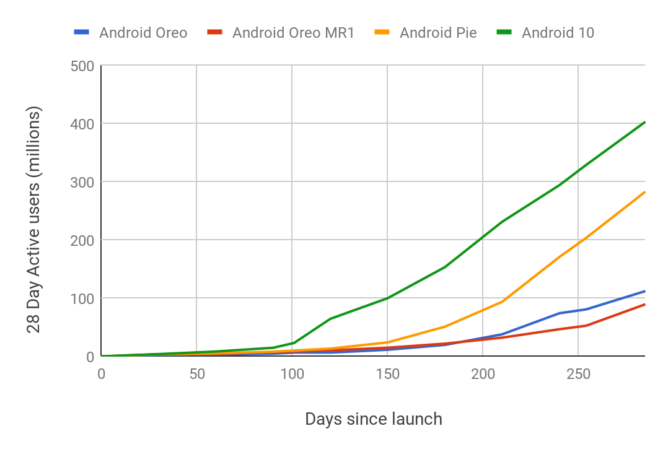 The fastest uptake of any Android update ever.

The news comes courtesy of an announcement made to the Android Developers blog today, with Google pointing to a 28% faster adoption rate than Android 9 Pie, reaching 100 million devices five months after launch. The biggest contributing factors, in Google's mind, are Project Treble, Mainline, and GSIs. The first two were separate efforts to further decouple OS components from Android itself.

Treble specifically allows for phone manufacturers to deliver updates without having to worry about deeper hardware drivers, trimming down how much time it takes to design and build software updates for new devices. We knew it was making a difference last year when Google published similar numbers for Android 9 Pie, and the rate is only increasing.

Project Mainline similarly decouples core OS services like media codecs and other tidbits into modules that can be easily updated through the Play Store, and it recently picked up 12 new modules with Android 11. While that doesn't directly make the process of building Android version updates easier, it means being left on an older version matters less and less as time goes on.

GSIs (or generic system images) provide bone stock AOSP builds that phone manufacturers (and enthusiasts) can use to try to test new versions of Android, as they should work on any Treble-compatible devices. Paired with an OEM developer preview program, Google thinks it's also making a dent in uptake.

Future changes landing with Android 11 should further help drive adoption rates in the coming years, like new Generic Kernel Images (GKIs) which will work across all Android devices for faster security deployments, and a new virtual A/B update system which takes the existing advantages of A/B updates (already now required in Android 11 and forward) while also taking up even less space.

Android's problem with "fragmentation" will never go away, so long as OEMs outside Google exist and Android remains open-source. But the practical impact of that fragmentation is less significant and less severe with each passing day.

App usage went up 40% during the pandemic, according to report from App Annie