Android 11 appears to have a launch date set, according to a video published (and since unpublished) by Google for the recent "Hey Google" Smart Home Summit. There may yet be a delay, and the context of the announcement is a little unclear, but a slide on the developer-focused video clearly says, "September 8th Android 11 Launch."

The video in question.

The date is clearly visible on the header on one of the presentation slides (above and below). While the overall context of the video at this point has to do with ensuring Assistant-compatible smart home device makers are ready for that date, the slide itself seems pretty clear. Barring any delays or changes, I think we can expect the Android 11 launch on September 8th. 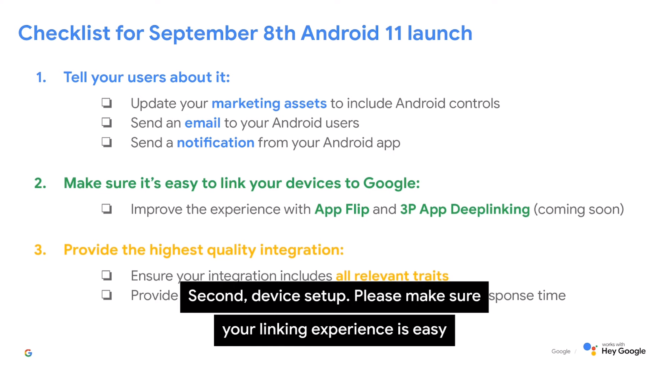 A still from the linked video.

We previously suspected that the beginning of September might ultimately be chosen for Android 11's stable release. Google promised developers "11 weeks of Android" starting on the week of June 15th, shortly after the Android 11 Beta 1 release. At the time, I speculated that the timing fits well with the previously published schedule, and we'd probably see Android 11 released near the end of those 11 weeks. September 8th pads that timeline with an extra week, but it otherwise fits.

Last year's Android 10 release was also at the beginning of September. Usually Google sticks to Mondays for its big Android releases, and September 8th this year is a Tuesday, but Monday of that week is Labor Day.

It's not irrefutable, and we may still have a few small lingering doubts (not the least of which being another delay), but this is as close to proof positive for a specific date that we could get, and I'm already adjusting my schedule around it.

As you can see from the broken embed in our post above, Google has since pulled the video. With that response, I think we can firmly point to September 8th as Android 11's launch date, pending any last-minute changes.