Early last year, we got word that Facebook was considering cross-platform chats between WhatsApp, Instagram, and Facebook Messenger, running on a unified, encrypted backend. After the first small steps towards compatibility in the form of Messenger Rooms in WhatsApp, we now see this cross-app integration taking shape. According to WABetaInfo, a few hints have appeared in Facebook Messenger that reveal how the company is working on a way to contact WhatsApp users through the app. 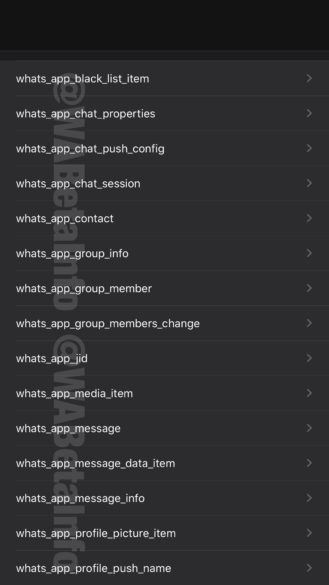 WABetaInfo explains that it found a database in Facebook Messenger, pictured above. It will allow Messenger to understand whether WhatsApp contacts are blocked, and it will contain details on the state of a chat (like the attached phone number, a message counter, and if the chat is archived) and whether push notifications are active or not. However, chat content itself is not stored in this database, or the necessary hooks haven't been implemented yet.

Since the implementation is still in such an early stage, it's unclear whether you can turn off the integration or if your WhatsApp contacts will be uploaded to Facebook Messenger's servers. With the upcoming unified backend for all of Facebook's chat platforms, it's possible that all of the messages you send via the company's apps will use the same infrastructure anyway.

Personally, I'm torn. While I look forward to not having three different apps just to contact all of my friends on my phone, I still don't think Facebook should've been allowed to buy Instagram and WhatsApp in the first place, hindering them from becoming viable competitors. With TikTok on the way out if the US does ban the social network, Facebook would be poised to remain the dominant social media force.