There are a lot of "cheap" Chromebooks out there, but if you want a good cheap Chromebook, you'll really have to dig. In fact, they're few and far between, and between old models, soon-to-be unsupported chipsets, and "gotchas" like legitimately terrible display panels, it's legitimately difficult to separate the genuine competitors from laptops deserve to be in the proverbial trash heap. But Lenovo's C340 is a great follow-up to the success of the previous C330, and it's Android Police's Most Wanted budget Chromebook pick. The 11” C340 looks a whole lot like the C330 we previously loved, sporting a similar shape and folding 2-in-1 design. The biggest design differences are the colors, a two-piece hinge, it is the tiniest bit smaller in all dimensions (including thinner), and the back of the screen is now metal — on top of some port changes.

The deck and bottom are still plastic, but solid and substantial enough that there’s no creaking, flexing, or bending in normal use. (Even if you take it in both hands and try to twist it, the C340 holds up well.) Overall build quality is better than you usually expect at this price point. While it’s not classroom-rated, this should handle being tossed around inside a backpack just fine. Speakers, as before, are bottom-firing. Quality is nothing special, though. They’re tinny and very lacking in bass, though they get loud enough to distort.

Ports include two USB Type-C, two USB 3.1 Type-A (one of each to each side), and a microSD slot and headphone jack on the left. Volume controls and the power button are on the right. Gone is the full-size HDMI port the C330 had, though I don’t really consider that a loss. Lenovo also addressed my primary port complaint with the C330 in this revision: Adding the second USB Type-C port gives you ambidextrous charging. 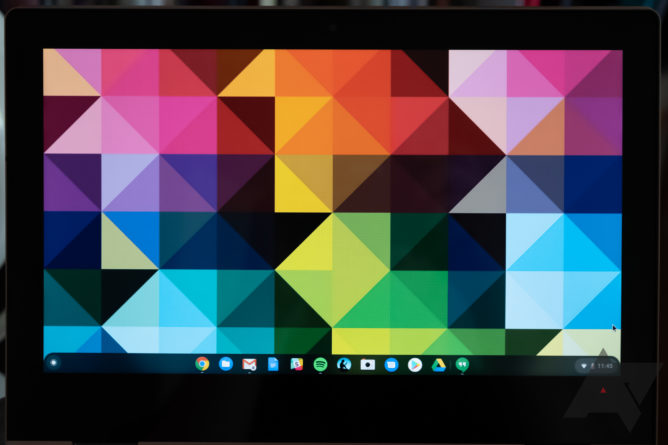 To my eye, the screen seems about the same as the C330. It’s still a 16:9 1336x768 IPS display, and while it’s not crazy high PPI, it’s sharp enough, gets bright enough, has decent color, and looks good even at off-angles — unlike the cheap TN displays many low-end Chromebooks get. My biggest complaint is that 16:9 aspect ratio, which isn’t great in tablet mode, though it’s better for media. I also spotted a tiny bit of light bleed along one side of our review unit, but it wasn’t noticeable in normal use. Though I’m pretty sure this is the same screen as the C330, Lenovo advertises it as hitting a different (lower) brightness. Either way, it seems about the same as I remember. It’s still bright enough for outdoor use in the shade, so long as you are careful about the sun and reflections.

The hinge for the display — which allows it to be folded around as a tablet or set up as a sort of tent — has just about the ideal level of resistance. It’s not so loose that the screen wobbles or falls back in normal use, and it’s stiff enough that you can easily set it just where you want it.

Like the C330 before it, if this Chromebook has one failing, it’s the lack of a magnetic closure when using it as a tablet. It likes to spring slightly back open, and I’d prefer to see it hold itself more firmly in position as a tablet.

As a 2-in-1, the touchscreen is topped with glass, and there doesn’t seem to be any oleophobic coating, so expect it to get a bit fingerprinty and smudged-up over time.

The C340 comes with a 45W PD Type-C charger and the expected manuals and warranty cards. 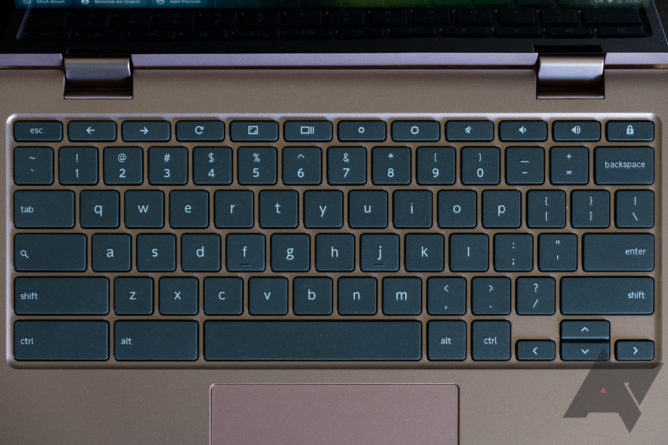 The C340’s keyboard is pretty good. To my touch, it seems to offer a bit over a millimeter and a half of travel, and while it’s not the most tactile experience, I was able to write most of this review from it without any issues.

This might not sound like I’m praising the C340, but with many cheap Chromebooks having downright bad keyboards, this is refreshingly acceptable. In general, Lenovo seems to care about that sort of thing more in its Chromebooks. It isn't backlit, though, if that matters to you. 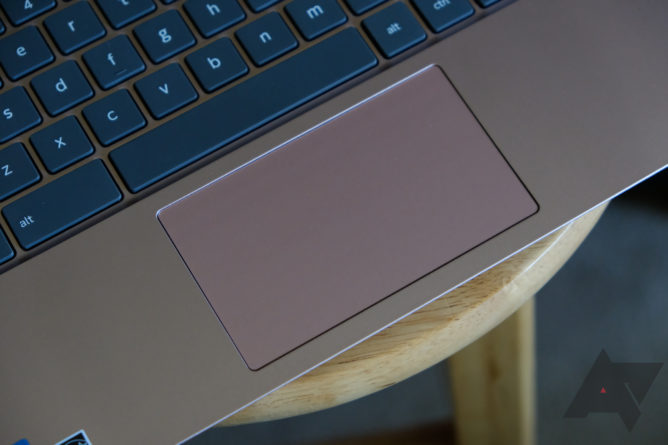 The touchpad’s fine and even matte texture might feel like high-end glass, but it’s just plastic. It’s also my least favorite thing about the C340 because it triggers one of my biggest pet peeves: it’s a little bit loose. Even a light touch will make the touchpad rattle before it clicks, and I can’t stand that, though most folks probably won’t find it bothersome. I should note, the C330 had the same problem.

The included front-facing camera is nothing special. The image is pretty grainy and low-quality. While it’ll be okay for stuff like Zoom calls, you’ll probably want to make sure your lighting is the best it can be to keep the quality up.

I thought the performance of the previous C330 was perfectly good for the price, but the ARM MediaTek chipset that powered it definitely wasn’t the fastest hardware out there. Still, the C340 and its Celeron N4000 CPU easily run laps around it. While before I felt I had to limit myself slightly when it came to extraneous tabs (a serious problem of mine), it was much harder to get the C340 to choke. As I write this, I have over 25 tabs open (including the resource-heavy Slack) across three virtual desks, and things are just fine. There were some moments where transitions or certain actions felt just a bit delayed, but it never impeded my productivity or workflow.

The only time things really stuttered for me in normal use was in use as a tablet. Dragging stuff around in split-window and tossing too many Android apps into the mix bogged it down pretty badly. There are also a whole lot more animations when you’re using it as a tablet, so it’s easier to tell when frames get dropped.

I never felt its performance in light-duty work to be lacking, though folks hoping to a lot of Android or Linux apps, or anything else that's particularly demanding, might have some complaints. As a point of comparison, it was faster than the Lenovo Duet — which I also thought was fine.

For those interested in benchmarks (which never tell the full story):

Lenovo claims the C430 offers up to 10 hours of battery life, and that’s not too far off the mark for me in laptop mode. In real-life use, I saw around 8 to 9 hours of active use between charges, in my estimation. However, I don’t believe in closing tabs. It may be possible to push that number higher in even lighter use. Either way, that’s firmly all-day battery life, and pretty great.

If you’re primarily using it as a tablet, you should cut that number down by quite a lot. As I see it, tablet use means you’re probably going to use more Android apps, and that will make a dent in your battery, in my experience. I estimate it sucks down power up to twice as fast between the more numerous animations and whatever it needs to do to run Android apps.

Standby time, though, is ridiculous. This Chromebook barely consumes any power with the lid closed tossed on a shelf or backpack. If you only use it an hour or two a day as a laptop in Chrome, this will easily last a week between charges.

Chrome OS is still Chrome OS. I’m not going to reiterate everything about the browser-centric operating system, because if you’re in the market for a Chromebook, you’re probably already familiar with the Chrome browser and Android apps. However, recent Chrome OS releases have substantially changed how the tablet experience works, and not everyone is familiar with those changes.

The biggest tweaks that bear mentioning here are the touch-friendly modifications the interface has gotten in recent months, including the new gesture-based navigation system, which I have mixed feelings about. Coming from Android, it doesn’t quite feel “right,” and the sensation of using it feels much closer to the experience on an iPad. Swiping from the edge gives you your “back” gesture, a short fast swipe up shows your shelf/pinned apps, a long fast swipe up drops you to Chrome’s app launcher (essentially your home screen in Chrome OS’s tablet mode), and a swipe up and hold takes you to the overview (basically Chrome OS’s multi-tasking/recents menu). However, the gestures can be a bit buggy on the current Chrome OS releases, and sometimes the long-hold doesn’t work. 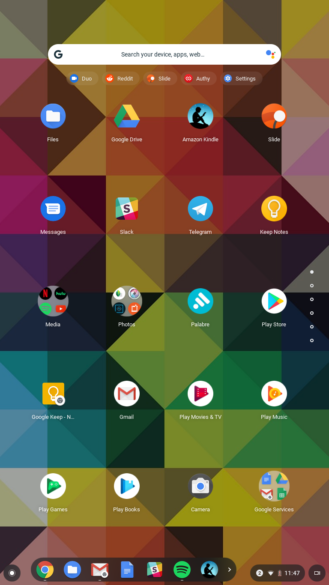 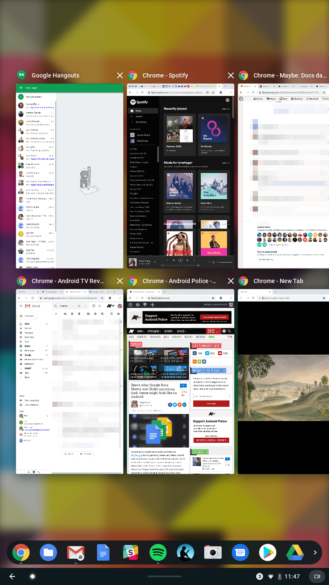 In broad strokes: I think it’s a big improvement, but occasional bugs and missing features (like iPad-style free-form windows in touch mode) impart a kind of “work-in-progress” feel. I also get the sense that Chrome OS is turning into a feature dumping ground, where Google can’t decide whether or not to take the final plunge into a touch-first interface, and it’s hedging its bets in every direction in a way that ultimately detracts from a truly cohesive feel. Essentially, Chrome OS feels like it’s doing too many things at once, and as a result, it’s not very great at any of them — merely “fine.” Still, for $300, “fine” can be objectively good.

Lenovo’s C340 will continue to get updates until June 2026. More recent models will last eight years, but that’s probably fine for the price. Its hardware will probably be a performance issue before it hits the end of that schedule.

The C340 is unarguably a better device than the C330 it replaced, and it even addresses a few very specific complaints we had about the previous model. My biggest point of contention is also my least reasonable: it hasn’t seen the same frequent, ridiculous discounts the previous model did. The C330 was almost perpetually on sale for under $200, while the C340 has stuck very close to its ~$300 MSRP. Of course, Chromebook sales are a little harder to come by these days with their popularity exploding in the wake of the lockdowns, with folks working from home and kids needing cheap computers for at-home schooling. Still, for the price, the $300 C340 punches above its weight, and we’re happy to recommend it. 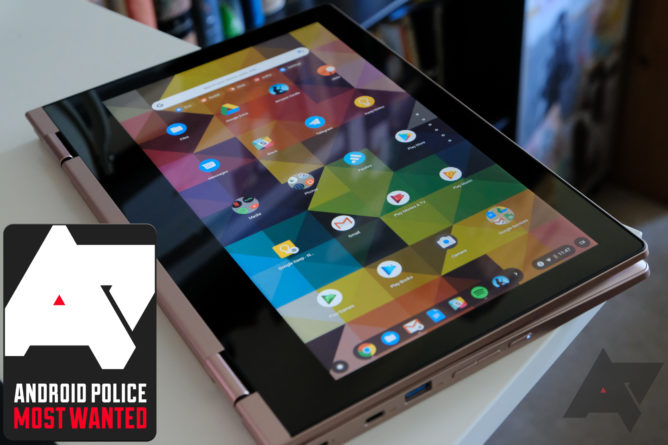 If I was picky, I’d say that the lack of a secure closing mechanism when folded back as a tablet is a bit annoying (especially considering how cheap magnets would be), the touchpad rattle is a little grating, 8GB of RAM in the base model would help, a backlit keyboard would be handy, a taller aspect ratio might be nice if you plan to use it for productivity, and performance in tablet mode could be a bit better. But these are all minor complaints for something at this price. Lenovo also seems to be listening, given we got the extra USB Type-C port we asked for last time, so we might see some of these points addressed in the next model.

In the meantime, the 11” Lenovo C-series remains the gold standard for affordable Chromebooks. The C340 won’t cost you much, but you’ll get good hardware and a great experience. Between the price and what you get for it, the C340 has earned our Most Wanted accolade. Sure, you can easily spend more to get something better, especially if you need a larger screen or more power, but odds are you don’t really need to.

The Lenovo C340 can be purchased in two different configurations at several retailers: