If you thought the Google Chrome lineup was complicated with its stable, beta, dev, and Canary channels, you haven't looked into Firefox for Android. For a while, we had stable Firefox, Firefox Beta, Firefox Nightly, Firefox Preview, and Firefox Preview Nightly (not to mention the separate Firefox Focus) — truly a mess if you're just looking for the latest version of the completely rewritten new Firefox. That's finally changing, as Mozilla is starting to simplify its lineup, leaving only three versions: Firefox, Firefox Beta, and Firefox Nightly.

If you use the current release of Firefox Preview available on the Play Store, you may have already noticed the change. The package has been rebranded to Firefox Nightly, and a banner in the app informs you that "Firefox Nightly gets updated every night and has experimental new features." For a more stable experience, Mozilla recommends switching to the Beta going forward. 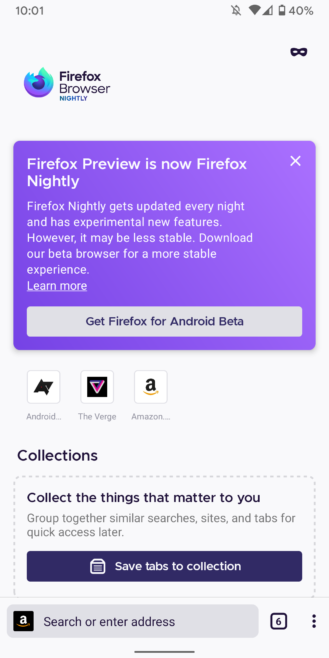 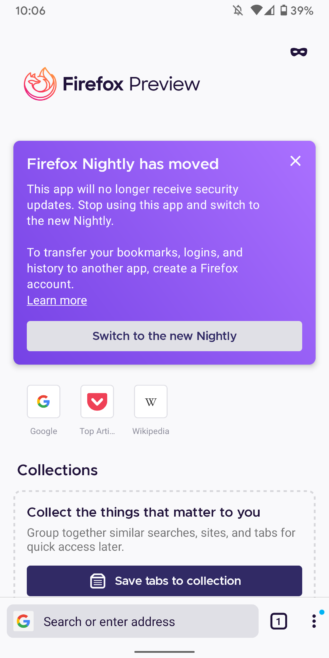 Meanwhile, the old Firefox Preview Nightly has been discontinued altogether. When you open the app, you'll see a toast warning you that you won't get updates anymore, and that you should switch to the new Firefox Nightly (the one that used to be Firefox Preview).

This all sounds very complicated, but it boils down to these three packages, as a Mozilla employee explains on Github: If you want to live on the bleeding edge, get Firefox Nightly. If you want the most stable experience with the rewritten Firefox, switch to Firefox Beta. And if you need all of your add-ons intact, stick with the aging regular Firefox build. At the moment, the old convoluted lineup is still available on the Play Store, but this should change over the next few hours.

Note that Firefox Focus is not going anywhere — these changes just affect the regular Firefox builds.