Arlo has been making some of the best home security products on the market for a while now. Just a few weeks back we saw the launch of the budget-oriented Essential Spotlight camera, but users looking for higher-end surveillance could always turn to last year's Arlo Ultra. Now that model is getting a few tweaks, as Arlo announces the Ultra 2, a mildly refreshed edition of its 4K-capable camera.

The new model is currently only available in a 4-pack sold exclusively at Costco for about $900. While that might seem pretty steep, it is less than you'll pay for a 4-pack of the original Ultra at other retailers, which will set you back a solid grand. The new package includes a 3-month trial of Arlo Smart with 4K cloud recording, though that might seem like a downgrade when compared to the original Ultra, which offered a 1-year trial for free, albeit not at full 4K. 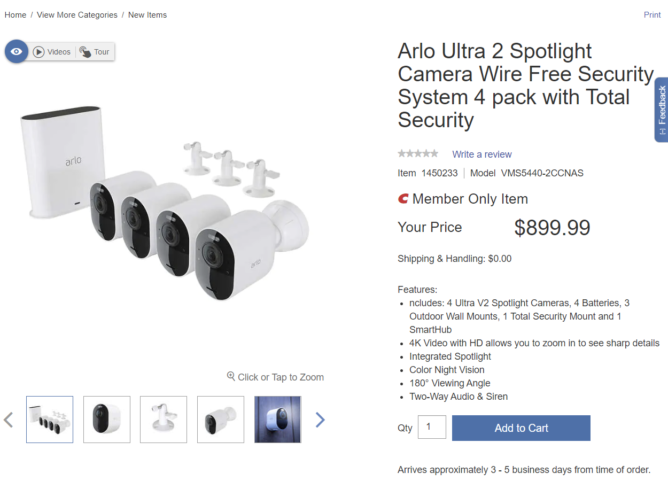 Arlo has always been known for great video quality, and the Ultra 2 should be no exception with its HDR 4K video recording. Features like color night vision, built-in siren, and a long lasting rechargeable battery make this seem like a solid camera, but if these features seem a bit familiar, you're not wrong.

The Ultra 2 is for the most part a spec-for-spec replica of the original Ultra. When we reviewed that device last year, we called it an extremely good camera for an extremely high price. What's actually changed? Not much apparently, save for the addition of dual-band WiFi with improved range from the SmartHub to the Camera. But if you're a Costco member in the market for a set of four solid security cameras, maybe that's enough. Availability is set to expand from Costco to Arlo itself and other retailers later this year.