In a statement provided to Android Police, Google has confirmed that its Pixel 3a and 3a XL smartphones are now discontinued. No more stock will be made available on the Google store, and the phone will only remain available through a handful of 3rd party retailers as remaining units sell through. Google's full statement, via a Google spokesperson, follows below.

Google Store has sold through its inventory and completed sales of Pixel 3a. For people who are still interested in buying Pixel 3a, the product is available from some partners while supplies last.

The official US Google Store listing for the Pixel 3a showed the phones as "Unavailable" for purchase as of this afternoon. As late as yesterday, the phone was listed only as "Out of stock." The change in language generally denotes when a product has reached the end of its retail life. 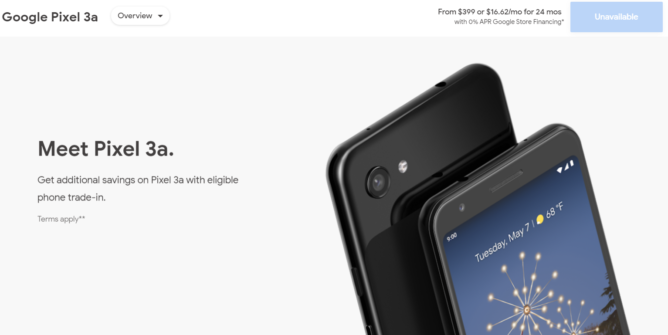 Launched last year at Google I/O to wide critical praise (including our own), Google's more affordable Pixel smartphone resonated with customers looking for an excellent camera, a clean version of Android, and access to the latest Google features in a sub-$400 package. The phone was generally much better received than the flagship Pixel 3 and 3 XL that preceded it because of the strong value it presented.

The successor to the Pixel 3a, the Pixel 4a, is still nowhere to be found. Rumors about an impending release range from anywhere from as early as this month to as late as October. Clearly, though, the 3a being discontinued isn't coming at a convenient time. Google has no product on sale to replace it, and discounts on the premium Pixel 4 and 4 XL have been rare since the global coronavirus pandemic reached a flash point in March.

At this point, there are growing calls for Google to simply consolidate all of its planned 2020 phones under a single launch, and rename the Pixel 4a to the 5a, and announce them together at a presumably-still-happening (and likely digital-only) event.

Leaks to date have pegged the Pixel 4a's (or 5a's) price at $349 with 128GB of storage, available in a single size. The 3a was available in two sizes, including a larger 3a XL model. Earlier rumors said the 4a would launch at $399 with 64GB of storage, but Google likely decided to offer more storage at a lower price in the wake of Apple's highly-regarded iPhone SE reboot. A planned Pixel 4a XL was also apparently scrapped.

Looking at other retailers, the 3a XL is shown as backordered at B&H, while the standard 3a is listed as "Discontinued." On Amazon, all remaining Pixel 3as are being offered by third party sellers as far as we can tell. While a few straggling units may yet make it to a few resellers, it's officially goodbye for the Pixel 3a.

Asus ROG Phone 3 set to be revealed on July 22