We've all been in a video conference where background noise coming from someone's microphone ruined the entire conversation. Although this is easily solved by going on mute, the problem persists if the participant needs to speak. Thankfully, Google announced a noise cancellation feature for Meet, preventing the attendees from hearing unwanted background, back in April. After the company already rolled out the feature to most G Suite Enterprise users, it plans on bringing the feature to more G Suite organizations in more markets.

In a support document, Google says noise cancellation will roll out to users in "Australia, Brazil, India, Japan, and New Zealand in the coming weeks." The company makes clear that it won't come to people "in South Africa, UAE, and the immediately surrounding areas" without stating why.

The technology has been in the making since 2018 and uses artificial intelligence models to filter out background noises from actual speech. It has been trained over time by Google teams using internal meeting recordings, as well as YouTube videos, to understand what sounds need to be canceled. Given the current coronavirus context, a lot more people were working from home, which naturally led to more unwanted noises in the background, such as kids screaming or dogs barking. This gave the teams a great opportunity to test out the feature and accelerate its rollout.

As the technology is still recent, the research teams are starting with a relatively soft approach, meaning the "denoiser," as it's colloquially called, may not block "noise" if your child speaks to you during a meeting, as this could still be considered speech. Similarly, breathing and coughing will not be filtered out initially, to avoid making the experience unnatural. Noise cancellation is still being fine-tuned, as it's very tough to filter out noises that are too close to the microphone, such as keystrokes or music, which can be hard to isolate. The ultimate goal is to make the conversation smoother, so whether background noise is fully canceled out or merely muffled doesn't matter that much, as long as people can remain focused on the conversation and understand each other clearly.

Even though the feature is becoming more widely available, Google is still working on improving it. However, it's also managing privacy expectations and doesn't plan to record meetings to improve the algorithm. Similarly, even though your audio needs to go through the company's servers to be "denoised," it remains encrypted, and the company's employees won't have access to it. 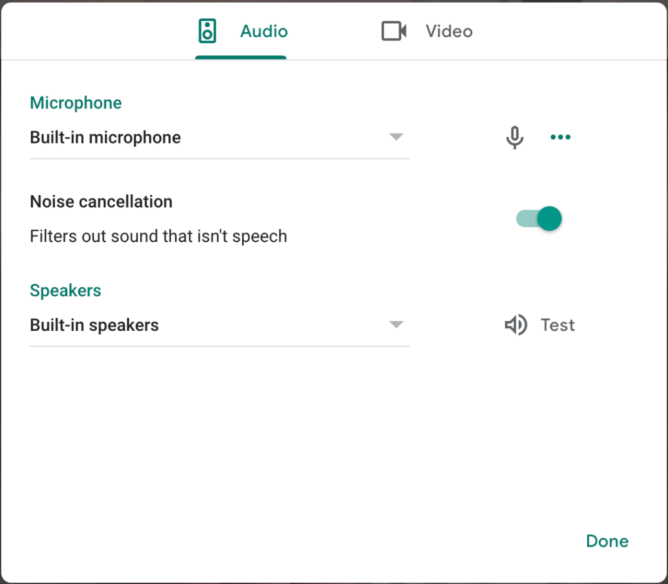 Noise cancellation has gradually started rolling out to G Suite Enterprise and G Suite Enterprise for Education customers. The company expects all users to have it by the end of the month on the web, with iOS and Android apps receiving the feature later on. Once it's available, the "denoiser" will be turned on by default, as shown above. There won't be a visual indication during the meeting showing noise is being filtered out, making the interface cleaner. You might want to ensure it's on before your call, though, as co-workers might hear you vacuuming during your team meeting. In all cases, the noise cancellation feature is still work in progress; and the company is working on improving the overall experience, so we'll probably see some changes and improvements in the coming months.

Interestingly, Zoom has had a noise cancellation feature since 2018, which may not be as advanced as Google's, but already cancels keystrokes and minor noise. I'm curious to see how the competition will adapt, especially given the current context, and since Teams has built a similar technology.

Updated with more details on availability.

Gboard beta is getting Smart Compose for chat apps

Spotify Premium Duo comes to the US and 54 more markets