The arrival of the smart home has made everything from switching off lights to turning on the coffee maker easier than ever, but there are some problems that take extra smarts to solve. For Nest smart thermostats, that extra help comes in the form of the company's Seasonal Savings program, a feature designed to helps to save on energy costs. Previously restricted to users with specific utility providers, it's now starting rolling out to all Nest thermostats.

Seasonal Savings is a program that has been available for some Nest thermostat users who are customers of select Nest energy partners. Google bills it as a "personal energy assistant" that works behind the scenes to save energy and lower bills.

The feature learns from your home and temperature preferences over the course of a week, and makes tiny tweaks that amount to just a fraction of a degree every day. Google says the biggest adjustments made generally occur while the household is sleeping or out of the home, so users may not even notice a difference in comfort. After the week is up, Nest adjusts the schedule for the rest of the season based on what it's learned in order to save you money. 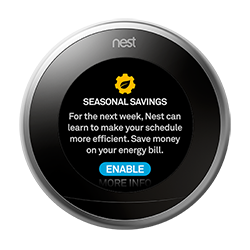 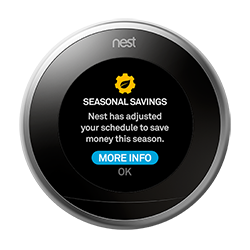 Even if this doesn't end up saving users a large amount on energy bills (Google says to expect maybe 3-5%), it's cool to see what's possible when Google sets its smarts on improving things in the home sector. Features like Seasonal Savings show the advantages of the smart home in a tangible way that makes the benefits clear when weighed against more traditional home appliances. And in a rare case of great timing, Google just added the ability to schedule a 3rd-party install of Nest products purchased from the Google Store.