It's counter-intuitive, but "budget" phones are harder to compare than flagships: Not only do you have all the models that launched at a specific price to look at, but there's the used market to consider, as well as older devices. You really need to know what your requirements are. But if you're on a strict budget and you need something new — not just new to you — then Motorola's latest E deserves your attention. The 2020 version of the Moto E sports a modern design, with slim bezels (excluding the mild chonk at the bottom), and a teardrop notch. It's a departure from last year's model, and looks a lot like recent Nokia phones.

Up top, you've got a headphone jack and microphone. The left side houses the SIM tray, and on the right you've got the volume and power buttons. The bottom has the lone down-firing speaker, another microphone, and an anachronistic Micro USB port. I get that this is a $150 phone, but Micro USB is unacceptable in 2020, and it's no longer an advantage or a reasonable inclusion in even a budget phone. It's also worth noting that single speaker is mono; there's no stereo sound via the earpiece. 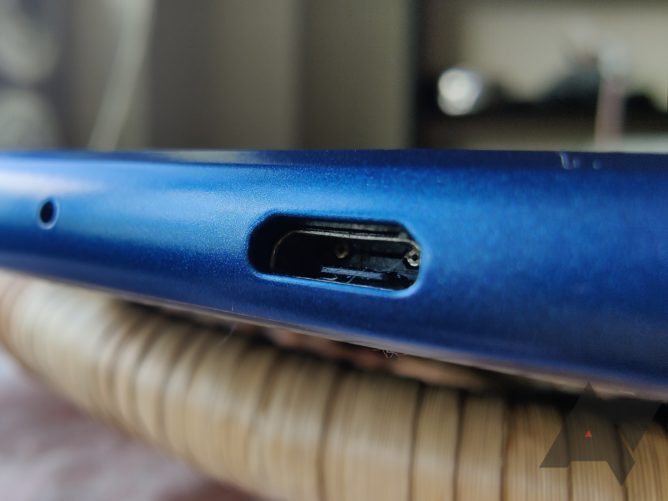 The phone sports a plastic midframe and glossy plastic back, plus a rear-facing capacitive fingerprint sensor that works perfectly reliably in my testing. But after using it for the last week, I feel the need to stress something: This is the slipperiest phone I've ever used. I'm not the sort of person to drop phones, but something about the shape, texture, size, and weight of this thing makes it fly out of my pocket or hands every chance it gets. I do not exaggerate when I say I must have dropped this phone at least once a day. I really, really recommend you get a case for it.

That said, the build quality here is stellar (especially for the price), and it hasn't accrued any damage from its repeated tumbles. You can take this phone in two hands and wrench on it as hard as you can, and it doesn't click or flex in the least. I was even fooled for just a bit that the plastic back was actually glass, and it's pretty hard to scratch. 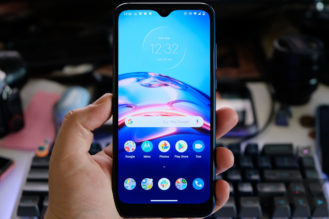 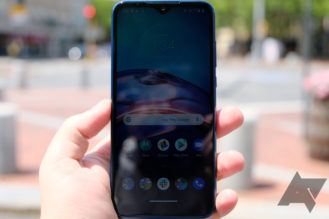 Left: Not bad. Right: Until you get outside.

The display quality is surprisingly okay. It's not the brightest screen outdoors — in fact, it's a bit too dim — but it is big and colorful. At this size, the 720p resolution definitely isn't very sharp, but you'll stop noticing that after a while. Screen illumination is also very even.

My only real issue with the screen aside from outdoor use was the automatic brightness, which seemed poorly calibrated even after a week of teaching and fine-tuning. No matter what I did, it was always a bit too dim or bright in low light, and I had to constantly dial it in manually.

Motorola claims that the 2020 E should work on basically all US carriers, including CDMA carriers like Verizon, so you probably don't have to worry about which one you're on, and it's worth noting Motorola is basically the only company doing this with such cheap phones. 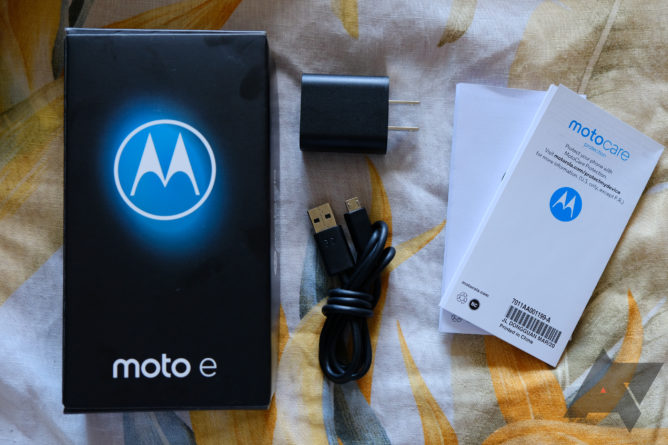 No SIM ejector, even.

The 2020 Moto E comes with a Micro USB cable and a 5W charger, plus the expected paper paraphernalia like safety and regulatory info, warranty details, and a quick-start guide. It also includes a limited one-year warranty you can further extend or augment with accidental damage protection through Motorola's site, as long as you do it within 30-days of purchase.

I'm a little stunned by the performance of the 2020 Moto E. Don't get me wrong, it's not a flagship — the Snapdragon 632 is a 2018-era SoC, and I'm about to launch into a whole list of issues and complaints just below. But it was surprisingly fine for normal, non-gaming use, even with the older chipset, and that's way better than I expected for $150. I have some "flagship" phones from 2017 that don't feel as snappy as the 2020 Moto E does in day-to-day use, and it's a little crazy how good cheap phones have gotten. If I was stuck with this phone for a year, I might still envy flagship performance, but I'd probably be fine.

That said, it wasn't always a smooth experience. Certain apps like Slack and Google Maps could bring the Moto E 2020 to its knees, and even just scrolling in Chrome on specific super-demanding (or poorly-optimized) websites could drop frames. The Assistant was extremely laggy as well, and acted like it was ready to listen to your commands a few beats before it was actually able to. But most of the time, things were fine, with one consistent and notable exception: Apps get pushed out of memory very aggressively. While the chipset is fast enough for normal use, 2GB of RAM isn't quite enough for Android 10 and 2020, and that's a problem that's only going to get worse with time. And if you toss games into the mix, the phone can't really perform at all. Don't expect to fire up Fortnite and have a good time.

32GB of built-in storage is also pretty low, considering about half that is actually available to the user. 16GB fills up fast if you take any photos, and it won't take too many apps to make a dent, either. Thankfully it is microSD expandable.

Outside general system and app performance, I also noticed that 5GHz Wi-Fi strength was pretty poor, and it would repeatedly disconnect or have issues at locations where other devices have full bars. General Wi-Fi speeds were also noticeably, palpably slower when loading content in apps. I tested around 10Mbps max on 2.4GHz Wi-Fi and 65Mbps on 5GHz. Other phones got double that, easily.

Bluetooth audio performance was fine for me — no stutters or signal issues.

I'm not as familiar with Motorola's software experience as I am other smartphone manufacturers', but if you like stock, you'll like the Moto E 2020. It ships with Android 10, and Motorola's changes are few and far between, and almost universally for the better. It is refreshingly unmolested, and I was surprised to see features I associated with Google's Pixels like Call Screen present on such a cheap phone. Moto's other tweaks like the Peek Display and Moto Actions gestures are just the sort of light-touch changes that genuinely improve stock Android. These extra changes are all easily accessed in the "Moto" app, but they're also accessible in Settings.

Unless somehow you like heavy-handed Android skins, the Moto E 2020's software will easily please. I rank it just under the Pixel experience and Oxygen OS — I think it's pretty good. But you probably can't expect a high degree of software commitment from Motorola going forward.

Motorola's software update efforts for lower-end phones have been subpar in recent years. The Moto E 2020 may land with Android 10, but the company tells us it isn't committing to any specific number of future upgrades. While the company has promised security patches every two months going forward, it's already two months behind the latest security patches at launch, which casts doubt on that claim. Paired with the lack of an Android 11 update commitment, and especially when compared to the history of competitors like Nokia, Motorola's commitment to updates here simply isn't good enough.

I also have one more very specific complaint: I really hate annoying boot sounds, and Motorola's is really obnoxious. Thankfully, you can turn it off in Settings -> Sound -> Power on sounds.

Battery life was, frankly, stunning. The entire time I used this phone, I only had to charge it once every two days. In one particular instance, it reached nearly ten hours of screen-on time from a single charge. Admittedly, in the wake of the lockdown, we aren't traveling as much as we used to, or using our phones in quite the same way, but numbers like these are pretty tremendous. The Moto E 2020 lasts almost forever on a charge. 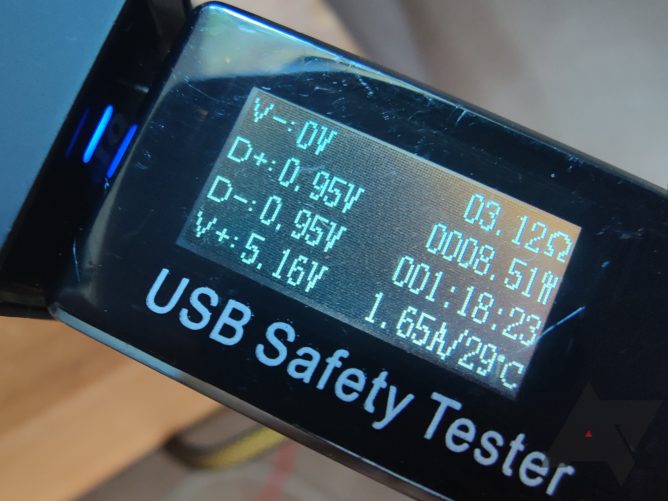 A bit more than Motorola's 5W claim, but still not a lot of power.

That's good, because you're going to hate charging the 2020 Moto E every time that you do. It tops up with an ancient Micro USB connector at pretty limited speeds. Motorola claims 5W, but I measured closer to 8.5W at peak. 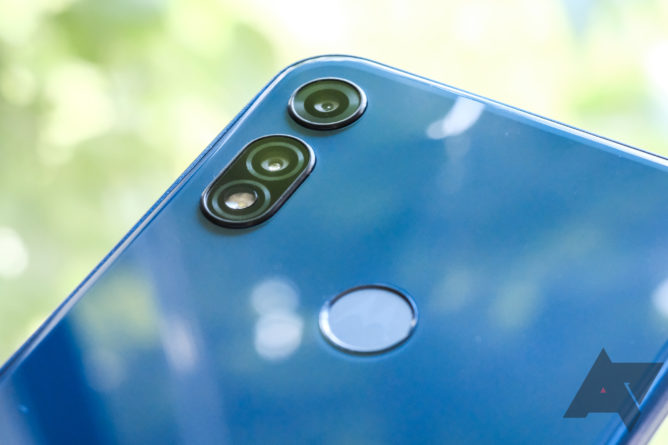 Two cameras — one of them does useful stuff.

Somehow it seems to seek out ways to ruin exposure for a given scene, and it has the dynamic range of a potato.

There isn't much sugar coating it, the Moto E 2020's camera is pretty bad. For the price, I think it's an acceptable compromise, but it's objectively and legitimately terrible. Somehow it seems to seek out ways to ruin exposure for a given scene, and it has the dynamic range of a potato. Even if you're really patient and you tap around to get things just right, the app itself is randomly slow to take photos. In short, this is "at least it has a camera" territory.

Although there are two camera/lens assemblies on the back, one is just a depth sensor for portrait mode effects, so in reality, there's only one camera you can actually use. Still, that's not surprising at $150, and expecting a wide-angle or telephoto lens for this price is a little unreasonable. The camera was the only thing about the Moto E that really bothered me in the last week using the phone. While most of the rest of the experience was either inoffensive or slightly impressive, every time I had to use the camera, I was immediately reminded of just how much this phone costs.

Low-light performance is poor, detail is poor in even good lighting conditions, and even with HDR, dynamic range has issues. Don't buy it for the camera.

Yes. Moto E 2020 is no flagship, clearly. If the price tag didn't make that clear, our review probably did. That said. I'm pretty pleased with what you can get from Motorola here for $150. Outside the camera performance, I never felt like I was using a budget phone in normal day-to-day use, and it delivers a surprisingly good overall experience.

There are things I liked about the 2020 Moto E better than even the more expensive TCL 10L, like the software experience and build quality. Objectively, it's not as good overall, but I'm not sure the differences between the two phones are worth an extra $100. That said, there's also a lot to complain about with the new Moto E. Micro USB, limited storage, no NFC, 2GB of RAM, and that poor update commitment will not let this phone age gracefully. Beyond being left behind when it comes to software, it's easier to find Type-C power sources these days, and contactless payments are more useful than ever. 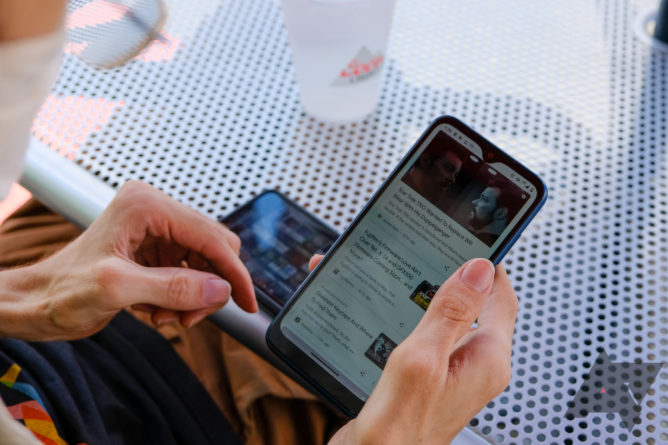 I'd like to tell you that a Nokia phone is a better choice, but that company's lineup is a little limited right now. You'd be comparing the 2020 Moto E to older phones that launched in 2019 that are now halfway through their lifespans, or the carrier-exclusive Nokia C5 Endi, or the new Nokia 2.3 which has a MediaTek SoC and no fingerprint sensor. The Galaxy A11 is also a close competitor, but it hasn't landed in the US yet, and the Galaxy A10e is both a bit long in the tooth and a bit more expensive.

In that sort of landscape, the 2020 Moto E is a pretty good choice for those on a budget. But without the promise of Android 11, NFC, or USB Type-C, we can't give it our Most Wanted award.

The 2020 version of the Moto E can be purchased at the following retailers:

6 Android productivity apps designed to help you work from home

How to back up all of your Google account data