For many people, Fitbit is synonymous with fitness trackers, but the company has faced new challenges from smartwatches in recent years. The Fitbit Charge 4 signifies a change, even if it doesn't look too different from its predecessor. The tracker packs everything you could want from a fitness tracker, and you get basic smartwatch capabilities like notification management, Spotify controls, NFC payments, alarms, and more. However, its $150 price tag may make it a tough sell when a smartwatch like Fitbit's own Versa 2 often goes on sale for the same price.

The Charge 4 comes in three variants: black, Rosewood, and a Special Edition. The only difference is the color for the former two and the included woven band for the latter. No matter which model you choose, you get a small and a large variation of the band included in the box, so the tracker should comfortably fit on any wrist. 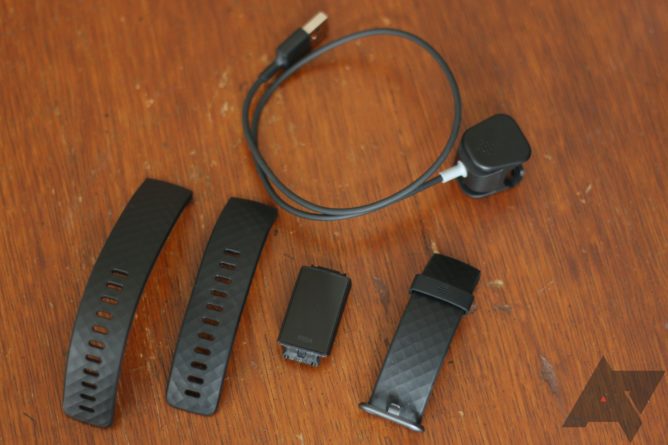 On the outside, the Charge 4 looks much like its predecessor. It has a one-inch 160x100 grayscale touch display with chunky bezels on each side and a Fitbit logo at the bottom. You could argue that other, cheaper bands have colored displays, but I don't think it's a necessity for a tracker. You'll find a pressure-sensitive surface that acts as a button on the left, indicated by an indentation. Vibration feedback gives you a sense of actually pressing something, though it doesn't compare with the iPhone 7's emulated home button. The back of the device gently curves to ensure the sensor array always touches your skin for correct heart rate readings. On my wrist, the Charge 4 is definitely among the lighter wearables, and I mostly forget it's there unless I interact with it, which is how it should be.

Unfortunately, the Charge 4 still relies on a two-pin connection for charging, just like its predecessors, which is a pain to use. You need to align the charger's claw perfectly and make sure the device really charges before you can leave it to itself.

If you've ever owned a Fitbit tracker, the interface will be familiar — the company isn't reinventing the wheel here. You can choose from an assortment of watch faces, but there are no customization options. A swipe down shows you notifications mirrored from your smartphone, a swipe up gives you an overview of your current stats, and a swipe to the left reveals "apps" like workouts, a Spotify remote, weather, timer, and settings. Holding the capacitive side button opens another menu for Fitbit Pay, sleep mode, and do not disturb. It's not the most intuitive interface, but it's fairly easy to navigate once you get the hang of it. 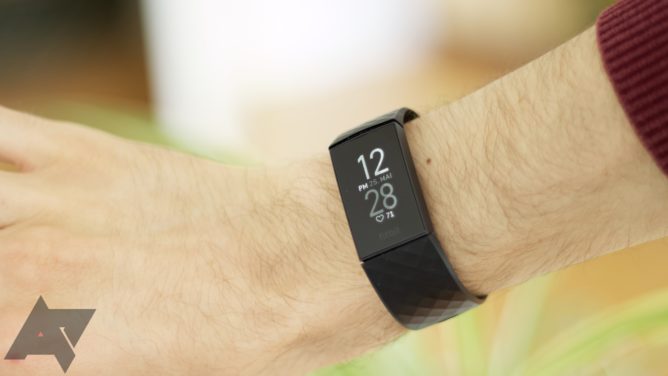 Fitbit uses the Charge 4 to introduce its Active Zone Minutes. They're basically the same as Google Fit's heart points, rewarding you for getting your heart pumping. Both are based on the American Heart Association and the WHO's recommendations. This system helps you put into perspective how well you do on a weekly and daily basis, and I feel it's much more useful than counting steps. 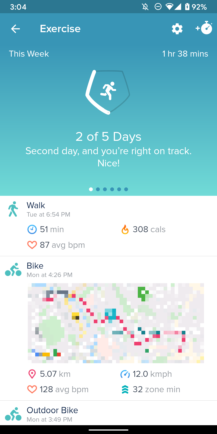 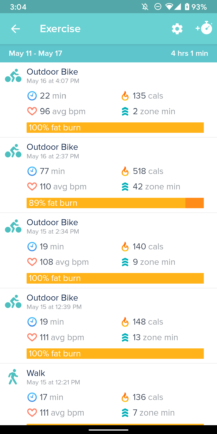 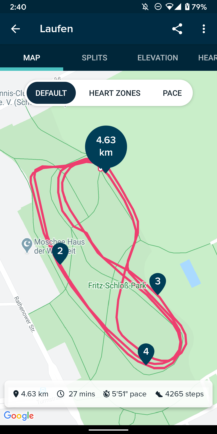 The automatic workout recognition has been hit or miss for me, especially for shorter bike rides or walks, but that's probably because the tracking only kicks in 15 minutes after you start an action by default, which you can change. If you don't want any automatic tracking to convolute your stats, you can turn them off for the device on the Fitbit website. Other than that, you can use the Fitbit app to customize which trainings you want to be able to manually activate via the band — there are a ton to choose from that aren't available on the Charge 4 by default, like HIIT or weightlifting. 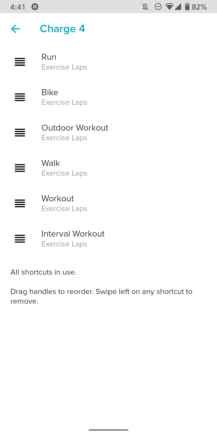 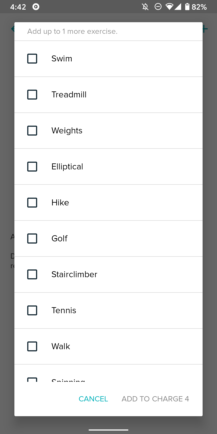 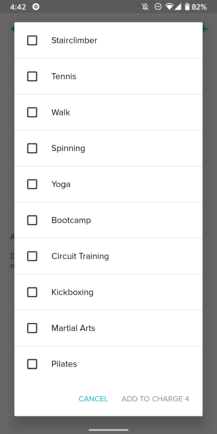 You need to swipe away one of the standard workouts before you can add others to the Charge 4.

During some at-home quarantine workouts, Fitbit routinely told me that I burned about as many calories as indicated by the training app I've used, so I'm confident it tracks my activities accurately. The same is true for GPS — it almost perfectly traced the paths I've taken while running and biking. I can't speak for swim-tracking, though, since pools are closed at the moment. You might think that a device like the $30 Xiaomi Mi Band 4 is just as good at these things, minus onboard GPS, but when I used both bands in tandem, the Fitbit Charge consistently offered more accurate readings regarding distance.

Fitbit promises up to 5 hours of continuous GPS, which seems accurate judging from my rides and runs. When you don't use it, the Charge 4 easily reaches the promised seven days of battery life for me, and that's with raise-to-wake and 24/7 heart rate monitoring — I only turned off the former during the night using Sleep Mode.

Notification mirroring worked like a charm during my two-week-long test ride with the Charge. You can allow only some apps only or just give the go-ahead for all of them, and you can set up pre-defined message replies. It would be perfect if Fitbit would also respect Android's DND mode, but some people might like that phone and band settings aren't synced. At least I haven't experienced any of the dreaded connectivity issues many Fitbit devices were historically plagued with — let's hope the company fixed the issue for good with the Charge 4. 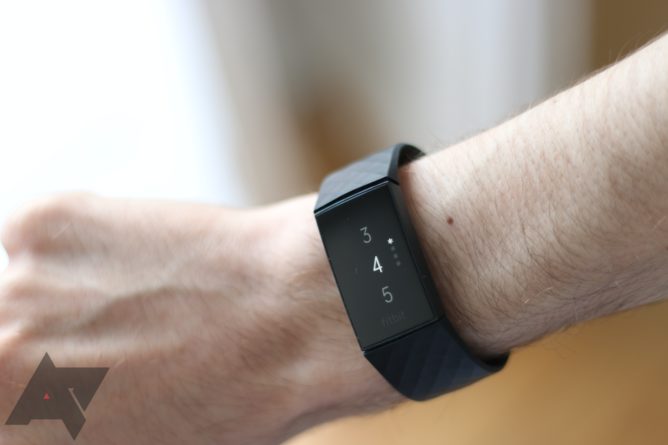 Entering a PIN like this is rather cumbersome, but is there a better solution?

I appreciate that Fitbit included its payment service, but you need to protect it with a 4-digit PIN, which is cumbersome on the small screen. It's great as a backup when you're out running without your phone, but that won't come up if you like to listen to music while working out. The Charge 4's Spotify integration is only a remote — there's no way to download a few songs to your wristband. Other music services aren't supported, either. Fitbit could've easily tapped into Android's notifications to enable that, and even the $30 Xiaomi Mi Band 4 works with any application. Tons of options and analysis in the Fitbit app.

The app is excellent, but it's a bit clunky and unintuitive at first. You have access to all of your stats in daily, weekly, and monthly overviews. You can also evaluate workouts down to the minute, track your sleep, and more. The app even gives you tips and encouragement on how to improve your health without being too pushy or annoying. You can also use it as a calorie counter and to keep track of your menstrual cycle. There's no native support for exchanging data with Google Fit, though, but at least there's a whole ecosystem of other supported third-party apps. The app also advertises its $10-a-month Premium tier for some extra sleep tracking features, wellness reports, and video courses, but thankfully the Charge 4 works fine without any of that.

Yes, if you want a reliable, full-featured fitness tracker that also offering some advanced smartwatch features like solid notification management and NFC payments. There are some shortcomings like the charger and Spotify-only controls, and the price is a bit high at $150, especially with a device like the Versa 2 going for $200 (or much less at times). But if you prefer a light-weight, more classic fitness tracker over a full-blown, bulky smartwatch, the Charge 4 is the way to go. Of course, there's also Xiaomi's Mi Band 4 at the other end of the price spectrum, but I found it to be routinely less accurate when it comes to tracking.

One month later, some long-term thoughts

I've left the Fitbit Charge 4 on my right wrist over the last month after publishing the review to get an even better picture. I feared that I might run into the dreaded Fitbit Bluetooth issues, but to my delight, that has not been the case — notifications are synced almost instantly, and the few delayed messages I got can be blamed on Android's battery management rather than on Fitbit. The most annoying aspect of the Charge 4 is still charging, though. On one occasion, I didn't pay attention when I attached it to the flimsy 3-pin charging claw and didn't align it correctly. Needless to say, the battery was dead when I returned to the tracker a few hours later.

I was initially happy with sleep tracking, but over time, I noticed that the Charge 4 is easy to confuse. While the Charge accurately recognized that I got up in the night on June 5 and stayed awake for about two hours, it didn't record that I still couldn't fall asleep when I returned to bed. I think I was awake until at least 3 or 4 AM, and I woke up well before 8 AM. 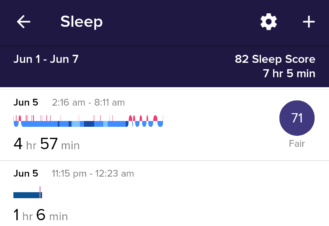 Sometimes, the sleep tracking is downright boneheaded. I use the Charge 4 as my alarm clock set for 6:50 am. It reliably wakes me up, though I don't get up right away — I usually stay in bed surfing the web for a bit. Despite the phone usage and the successfully disabled alarm, the Charge 4 routinely thinks that I keep sleeping after that, giving me an additional 20-30 minutes of sleep at times. Fitbit's software should be intelligent enough to tell the difference between lying in bed on my phone and sleeping, especially since I use the tracker as an alarm. I suspect the same happens at night when I lie in bed reading or surfing before I sleep. 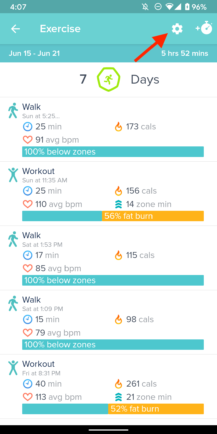 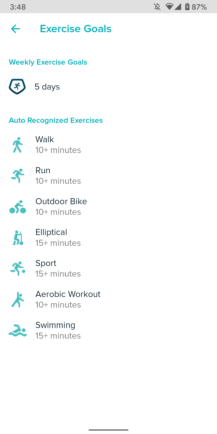 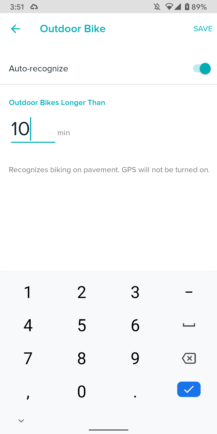 I've also experimented with Fitbit's activity tracking cutoff and reduced the default 15-minute period for automatic workout recognition to 10 minutes for my more common exercises. This seems to help a lot with short bike trips, though of course, not everyone wants to see all of their 10-minute walks or rides in their workout history.

Overall, my opinion on the device hasn't changed too much, despite the sleep tracking woes — once you know that you have to accept certain inaccuracies, you can work around them. I still think that the device is placed awkwardly in Fitbit's lineup, though. It offers barely any substantial improvements over the Inspire HR other than on-board GPS and Fitbit Pay and gives you much less bang for your buck compared to the Versa 2. You've got to be looking for a very specific feature set (on-board GPS and payments but no on-board apps) when you decide to go for the Charge 4. That doesn't make it a bad device — it just remains unclear who exactly it's for.