Fake reviews on the Play Store are a topic talked about way too often, yet here we are again. Despite Google pouring tons of research into keeping the platform free of spam and malware (leading to quite some achievements, I must add), fake reviews remain a problem for Android device owners and developers alike. The problem is far from new, but apparently, malicious actors seem to be able to slip through the cracks again and again — and it appears their methods don't even have to be too sophisticated.

A tipster who recently reached out to us brought this issue to our attention with an example. He pointed us to an app called iGPSPORT, a companion app for a cycling computer. A look at App Brain's Play Store ratings histogram reveals that the app never really received high ratings until the beginning of this year, which is when it suddenly jumped to an average of five stars. The tipster tells us that the app isn't exactly known for reliable Bluetooth connectivity, which many early commenters pointed out. Even though many of these complaints are still prominently featured in the review section of the app, it has surged to a 4.7-star average over recent months. 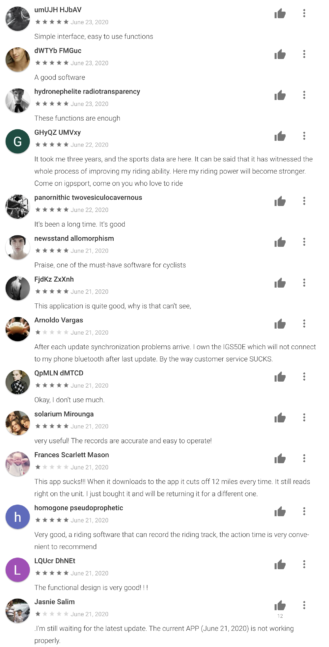 Looking at the app's recent reviews, there are two obvious patterns at play: One portion of reviewers' names consist of random five-letter first and last names, while another portion of names consists of two random, uncapitalized words. Some folks might not want to see their true names anywhere on the web, but the sheer amount of these similarly generated names and five-star reviews should set off some alarm bells in Google's algorithms.

It strikes me that algorithms Google has trained for years aren't able to spot these obvious fake accounts.

Of course, we still need to give this cycling app the benefit of the doubt: The app may have been targeted by some review farms trying to blur which customers they work for, but given the number of these reviews, it's rather unlikely.

There are probably much more sophisticated fake rating campaigns with more realistic names, but it strikes me that algorithms that have been trained for years aren't able to spot these obvious fake accounts. Even if each individual one might not be a spam account at first sight, the reused naming scheme and the sudden influx of high ratings should be a sign that something's off.

Fake ratings like these aren't just a nuisance. They make people lose trust in the platform's legitimacy and could hurt developers trying to promote similar products with honest methods. There are even companies out there trying to hurt their competitors' credibility with fake reviews, hoping to push them out of the Store for policy violations.

While you won't necessarily look at some Play Store ratings for a companion app when you purchase a new cycling computer, inexperienced people might get set up for a scam app with a high average rating or a clone of a discontinued beloved weather app.

It certainly doesn't help that fake reviews are often available for single-digit prices per rating when purchased in bulk, offered by a multitude of businesses. Some unsuccessful or upcoming, naïve developers could be tempted or feel pressured to try to supercharge their products for a small fee, since high ratings will more likely give them a favorable spot in Play search results — even if the practice will get them thrown out of the Play Store once uncovered. However, with Google's weak track record when it comes to spotting fake reviews, that might not be enough of a deterrent.

The company needs to step up its game to make the Play Store a safer and fairer place for everyone. It could even be worth exploring a co-operation with the competing App Store, as Apple is struggling with similar years-old problems on its platform.