Spotify has been acquiring and promoting podcasts at an aggressive rate. Now, it looks to quicken the pace on monetization by letting brands in on a new ad campaign integration it is testing for its original shows and a major expansion to its programmatic advertising technology platform.

Instead of having advertisers losing out on potential customers by having listeners type in a URL with a promo code in it, Spotify is now testing out an code-embedded link placed directly within the page for that particular show's episode. The company has titled this alpha initiative "In-App Offers." 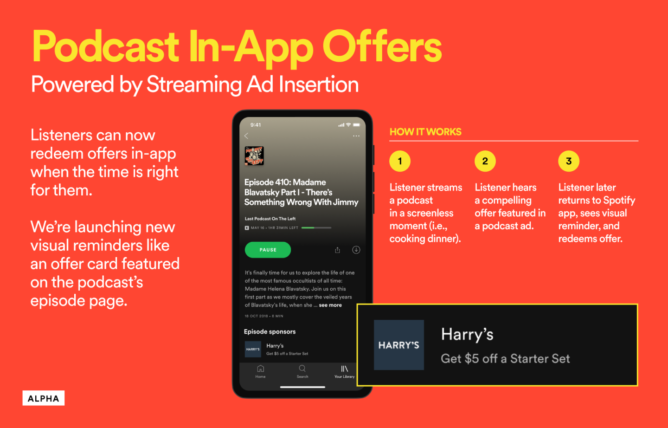 Right now, these so-called offer cards won't be seen by every listener immediately, but they do have opportunities to appear for the duration of the campaign. Harry's, HelloFresh, and Quibi have signed on as first partners for the streaming service's original shows in Germany and the U.S. with The Verge reporting that "Last Podcast on the Left" and "Herrengedeck" being the first to see the new integration.

Spotify's head of global advertising business and platform Jay Richman has stated that this new initiative is just "one step in a larger innovation path to productize the coupon code," so expect those offers to become more apparent, perhaps with an oblique tilt to Spotify's own productions rather than those not under its umbrella.

What's powering In-App Offers is a technology platform called Streaming Ad Insertion. Spotify introduced SAI in January to distribute ads at the point of streaming instead of having shows print custom reads to tape. It also lets brands track nuanced metrics in real time. U.S. clients will have access to the platform starting this summer.