The internet is full of great long-form content, but not everyone has the time to read everything they're interested in. What if you could just turn any text into an audiobook that you can listen to while you do other stuff? Google seems to think that's a great idea as it offers that as a feature on Android. You just need to invoke Google Assistant when you see an article you'd like to have read and say "Read it," "Read this page," or "Read it to me." You can try that with the text right here.

Compared to Google's older text-to-speech engine, the available voices sound incredibly natural and are capable of properly working with some abbreviations, like e.g., GB, or mph. While the voice command is all you need to know if you want to jump into the feature real quick, there are a few things you should be aware of if you're interested in using Read It extensively.

When you say the command you're thrown into a custom browser built for the reading feature where you'll see the article in the top two thirds of the interface and playback controls on the bottom. By default, the website automatically scrolls along as it's being read to you. You can jump back and forth via the rewind buttons next to the play button or by tapping the paragraph you want to listen to. You can also adjust the reading speed down to a tempo of 0.5x or up to 3.0x. I personally think 1.2x is the sweet spot, but that comes down to preference. 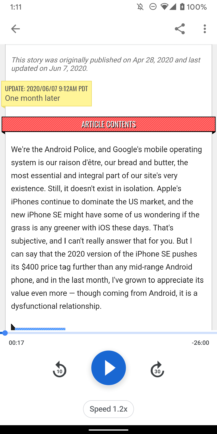 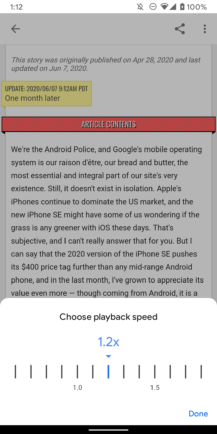 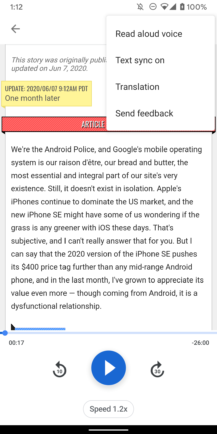 When you tap the three-dot overflow menu in the top right corner, you're presented with a few more options. You have a selection of three alternative voices for reading, another female one and two male ones. It's also possible to turn off text sync if you don't want the article to scroll along as it's being read. The third entry, translation, is pretty hidden, but incredibly useful. It offers to translate the text into or from 42 languages. With recent advances in Google Translate, you can often almost think the article has been translated by a professional. 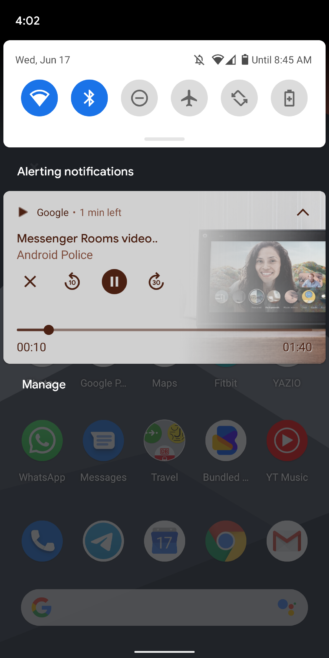 Read It becomes especially magical once you turn off your display or open another app while it's reading your article. Like any audio player, it will continue reading your article. You can pause, stop, and skip back and forth via a notification. When you tap it, you can also return to the text itself, should you want to follow along with what's currently being read.

There are also some limitations. The feature only reliably works in Chrome and other Chromium-based browsers — if Firefox is your preferred app for surfing, you'll need to copy and paste URLs over to Chrome. It also looks like a bug prevents you from invoking the Assistant in some Chromium-based browsers like Vivaldi and Brave, so I couldn't test Read It there. . (Update: It looks like an update to Google or Internet broke Read It on Samsung's browser.)

Similarly, Read It doesn't work for all apps. I tried it on the New York Times, CNN, The Guardian, Medium.com, and Feedly, but they all aren't compatible — you'll need to open the respective websites in Chrome to get going. That's because developers have to add some extra code to support the feature. Since the implementation doesn't seem to be too complicated, the demand likely just isn't there to incentivize the broad addition of Read It. At least it works with Google News and Google's new custom Search browser. 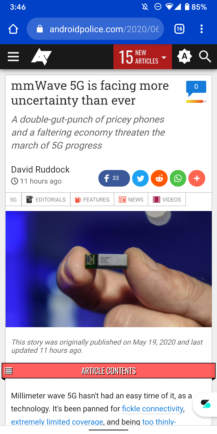 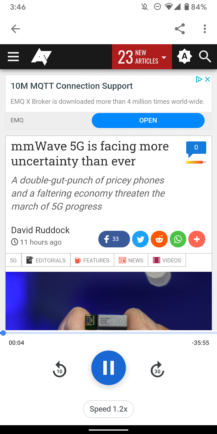 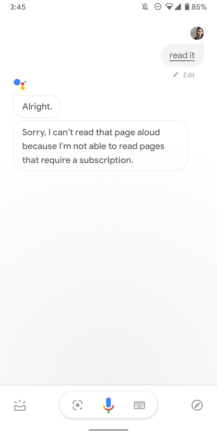 Paywalls are also a problem for Read It. That's because it's basically a separate browser with its own cookies, logins, and history, so even when you're logged into a website like the New York Times in Chrome, Assistant will tell you that it can't read paywalled text. The same is true for Scroll, the subscription service that removes ads from some websites like ours. You'll have to endure ads while the article is read to you. Similarly, you'll see cookie privacy notices, even if you've already agreed or disagreed in your default browser.

There you have it — while Read It is a joy to use when it works, there are some rather odd limitations. Let's hope Google is interested in actively pushing the feature and starts encouraging third-party developers to integrate Read It support. It would also be great if there were a way to access subscriptions. Maybe that'll be possible someday.