Owlcam originally cost $349. A year of LTE service was built into the price, but after that, you could either opt to continue service at $10/month or $99/year. This was a lot of money for a dashcam, but the idea of being notified on your phone if anything happened to your car made it worth it for some. Sure, the resolution was 1080p and not 4K, and the OBD power made all my cars pop up with messages about the batteries being drained if I hadn't driven them for a couple of days, but I kept using my Owlcam review unit even after the LTE service had expired because it still functioned as a dashcam. On May 20th, I received my first email, littered with grammatical errors, regarding what would happen with Owlcam. You can read it in full above, but here are the major points:

I'll be honest — I didn't read the email beyond the first few paragraphs. In my mind, since I had been using my Owlcam as a regular, non-LTE-connected dashcam for so long, these new plans would not affect me at all. Now that I'm reading it in full, I still can't find where it mentions that my camera would be effectively bricked if I didn't buy a plan by May 31st. 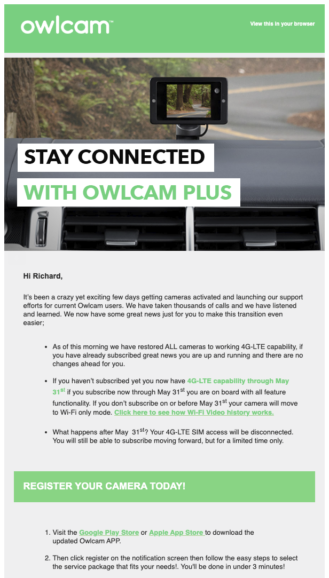 The emails I received also directly contradict themselves. In the first one, it says that CallPass will not support Wi-Fi Only mode, but the next one, which was sent two days later (and can be viewed above) states, "If you don't subscribe on or before May 31st your camera will move to Wi-Fi only mode." This email also served as a notification that LTE service had been made free for everyone until May 31st. I'm guessing this was intended to make people realize that they should start paying for LTE if they hadn't been doing so previously, but given that most people got a free year of LTE service when they first purchased their Owlcam, I'm not sure this was a great idea.

Thus far, I have received seven emails from Owlcam under CallPass ownership, and none of them contain any mention of the new, dramatically higher pricing (or evidence of proofreading). As a refresher, here's how the pricing compares:

The numbers speak for themselves; the monthly cost has doubled, and the yearly cost has actually more than doubled due to a more stingy discount. There are some new group plans, but those are still more expensive than it was to run multiple Owlcam subscriptions previously. It should be noted that several features (Live Video Viewing, Video History, and Creating Clips) are now built into that cost, whereas they technically weren't before (users had previously been able to view 60 minutes of footage per month for free, after which every additional hour of viewing would cost $5). But given that Owl Cameras itself had said that it would be unlikely for a user to view that many minutes of clips in a month, I'm inclined to believe that CallPass knows that they're not really going to be losing any money with this "free" feature.

My experience and the backlash

On June 1st, I went for a drive and noticed that the Owlcam's screen never turned on, despite the green LED blinking away the whole time. My initial thoughts were that my Owlcam may have died, or maybe it was disabled by the new owners because it was a press unit. I then went online and actually saw the new pricing for the first time. Unsurprisingly, current Owlcam owners and subscribers were not happy that they were virtually being extorted for an extra $116 a year to continue using their already expensive dashcam. At this point, I looked through the emails I'd received from the new owners, finding no mention of this massive price hike.

The Owlcam app is down to just 1.7 stars on the Play Store, largely due to new reviews from incensed owners in the past couple of weeks. Virtually all of them mention now having a paperweight, refusing to pay the much higher price, etc. Recent iOS App Store reviews tell the same story. I did find one review, which you can see at the bottom of the screenshot above, particularly interesting. The reviewer claims that his Owlcam still doesn't work despite having actually paid the new $20 monthly fee, and that he hasn't received any response from customer service in two weeks. Yikes. 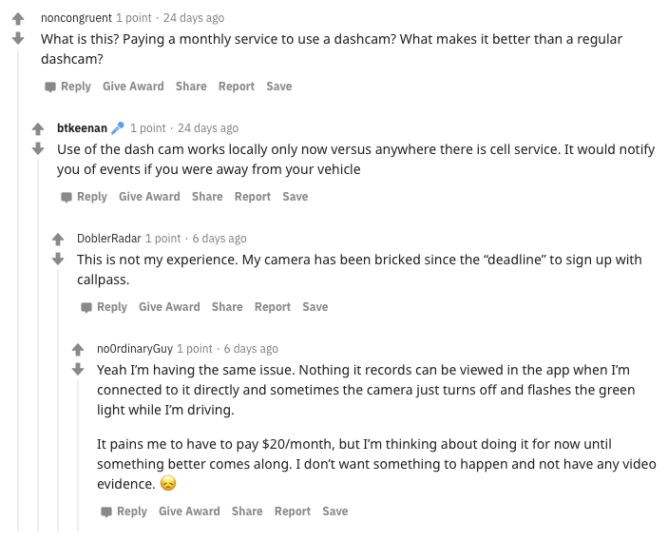 I only realized that other people's Owlcams were being disabled as well after poking around online, though this doesn't seem to be the norm. The screenshot above is from r/Dashcam, with several owners on the subreddit experiencing similar issues to mine. Doing a search for "Owlcam" on reddit reveals that virtually the only posts being made about the camera now are requests for replacement options.

It turns out there's a Facebook group for Owlcam owners, the vast majority of whom were (unsurprisingly) displeased with the price jump. There are all sorts of complaints posted — waiting on hold with customer service for hours on end, overheating issues with the camera itself, and so on — but the most egregious posts, without a doubt, had to do with many customers' cameras being outright disabled like mine. From what I can tell, it's unclear why this is happening to some units and not others, but below is a post that should, according to CallPass, help revive those disabled ones.

The post below may help those of you with bricked cameras. That said, I reached out to Owlcam support via email five days before publishing time and have not heard back, so waiting on hold for a few hours might be better. 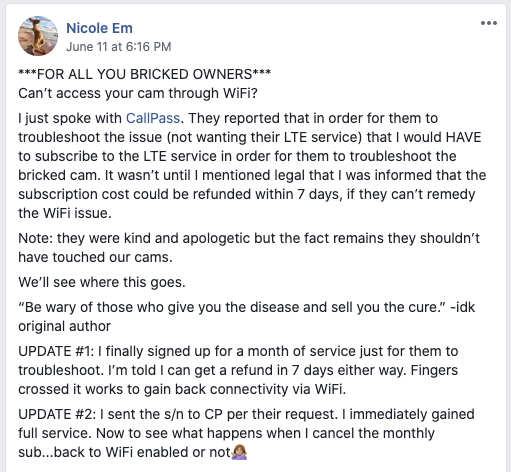 I also found this nice instructional video that was shared there on how to properly dispose of your camera.

Unfortunately, there aren't many good LTE dashcam alternatives out there. I tried out the $200 PureCam shortly after reviewing the Owlcam, but it's uglier, has a much less refined interface, and still costs $15/month. BlackVue appears to offer one, but it's pricey at $439+, doesn't have any dedicated plans (just a nanoSIM slot), and appears to be for Vodafone Australia customers only. The Waylens Secure360 seems interesting; it stickers for $400, but it's currently on clearance at Best Buy for $280. However, reviews aren't the greatest, with users claiming it's buggy and too sensitive. The data plan is pretty cheap at ~$8/month if you buy the annual plan, though. The best bet I've seen so far seems to be the $299 Raven Connected, with $10/month LTE available.

It goes without saying that I've yanked the Owlcam out of my car; after all, the thing doesn't work anymore, and I refuse to be basically extorted by the new company for $20/month when I didn't even find it necessary to pay $10/month previously. I didn't pay anything for my Owlcam in the first place (it was a review unit), so I can't imagine how angry actual customers are. I will probably revert to a basic, non-LTE dashcam, since I wasn't using the LTE on mine anyway. 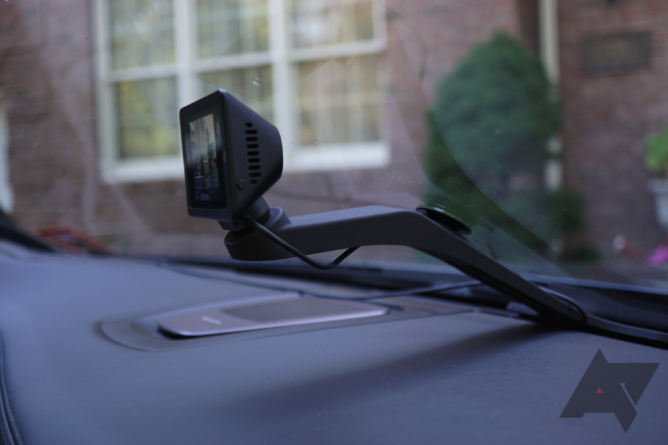 It's disheartening to see what happened to Owlcam. It was a good concept and a decent execution for a startup, but I guess the business model just wasn't profitable enough. If anyone from CallPass is reading this, I'd recommend you actually address the bricked units and hire a few more customer support representatives. Also, hire someone who can actually use commas to write your marketing emails. How to use multiple Google accounts on a Chromebook