Asus's ROG phones have always been jam-packed with the best hardware you can think of, and it looks like this won't be different for the next smartphone in the series. The ROG Phone 3 has hit the Chinese regulation agency TENAA, and it spilled almost all of the internals. It will run Android 10 out of the box and comes with an overclocked, 5G-enabled Snapdragon 865, and up to 16GB of RAM and 512GB of storage. Other than the regulatory information, we've also got a first look at the handset thanks to videos and photos leaked on Weibo, via MySmartPrice.

Compared to its predecessor, the ROG Phone 3 appears to be a little toned down on the outside. As far as you can tell from TENAA's lackluster photos, the colorful logo and patterns on the back make way for a black and white design, though it looks like there are still some decorations drawn across it to help it retain its "gaming phone" reputation. The camera array grows longer towards the middle of the back, making space for three sensors instead of two.

Other than growing just a tad heavier and bigger, the rest of the handset doesn't seem to be too different from the ROG Phone 2. Power and volume controls can be found on the right side, and the front still seems to come with some bezels, fitting a 6.59-inch 1080p AMOLED display. A fingerprint reader sits underneath the panel. There's also a development that many fans probably won't be too happy about. It looks like the ROG Phone 3 might do away with the headphone jack. The documentation states that it's a "shared port with charger," so you'll have to adapt to dongle life or Bluetooth, both of which aren't ideal when you play games.

With these hardware details out of the bag, we're only missing information regarding the cameras, further details on wireless charging, IP ratings, and pricing, and we'd like to see some high-res renders. We also already know that the ROG Phone 3 will have Stadia preinstalled, though now that more and more phones support Google's cloud gaming platform, that seems less relevant.

Image and a video 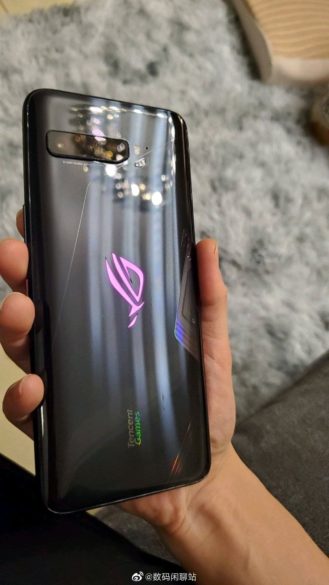 Following the TENAA leak, MySmartPrice got its hands on some additional photo and a video of the phone. Both the video and the photos were posted to the Chinese social network Weibo, though the former has since been taken down.

As you can see, the logo on the back is still glowing, and in contrast to what we saw in the TENAA photos, the other ornaments surrounding it remain colored, just like on the predecessor.

Update: Our coverage previously included a promotional photo of the Asus ROG Phone 2 which we mistakenly took for an image of the ROG Phone 3. We have removed this asset and updated the article accordingly.

The OnePlus Shelf is back from the dead, gets swipe-down access in latest OP8 launcher beta

T-Mobile Tuesdays are coming to Sprint next week