It's been about ten months since Mozilla introduced its own VPN service, Firefox Private Network. Six months later, Mozilla expanded the secure browser initiative to Android devices, offering a free VPN app. Today, it was announced that the new VPN will be open for beta testing nationwide, no waitlist required to get in. In a few weeks, the service will exit beta under its new name: Mozilla VPN.

The company's VPN was first offered in two tiers, a basic (and free) browser extension version, and a subscription-based app that cost $4.99 a month. The latter option provided whole-device protection, so unsurprisingly, there was a waitlist for it.

As of today's announcement, the premium option is open for public beta testing on Windows, iOS, and Android, no waiting necessary ⁠— Mac and Linux apps are soon to follow. Starting soon, the browser version will also transition to a subscription-based plan, at $2.99 a month. 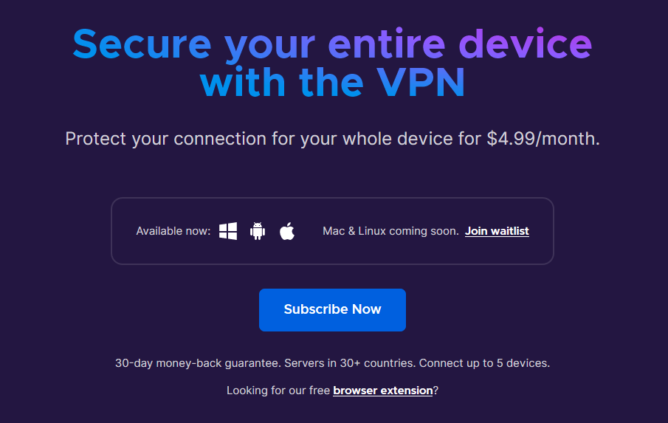 In an open letter to the public, the company shared some thoughts on how user feedback was instrumental in the growth and development of Mozilla VPN. For example, 70% of early beta testers said the VPN helped them feel safe and independent online. This speaks to one of the main selling points of the service: Mozilla's "Data Privacy Principles." The company claims that it's actively forgoing additional profits by avoiding third-party data analytics platforms and relying more on their subscription-based business model.

You can download the Android app at the widget below.