Last fall, Microsoft introduced PowerPoint Presenter Coach, an AI-based feature integrated into PowerPoint with the goal of improving the presentation skills of Office users. When activated, it provides on-screen guidance based on your how you're speaking, from reading off slides too much, to using an excessive amount of umm ... filler words. After existing as an exclusive feature in PowerPoint for the web, Microsoft is finally bringing it to the Android platform. 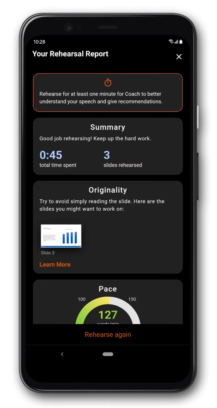 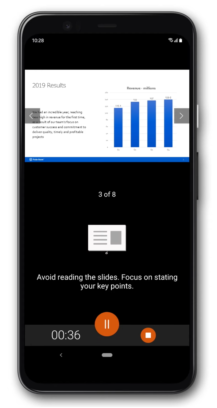 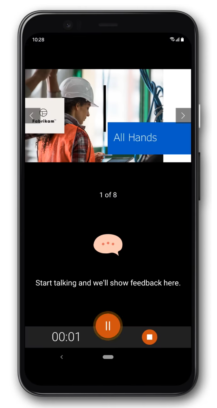 Like the web version, PowerPoint Presentation Coach carries over its key features to Android. You're still getting live feedback on the bottom half of the screen as you present and Your Rehearsal Report, a briefing at the end that summarizes your overall pace, originality, filler words used, and more. Unfortunately, the report can't be saved from the app itself, so you'll have to take a screenshot if needed.

PowerPoint Presenter Coach can be accessed from your PowerPoint Android app and Office Mobile app, as long as you're running the latest versions. You can give it a try by tapping on the actions menu -> Rehearse with Coach -> Start Rehearsing. Keep in mind that the feature works best when you're in a quiet place. Currently, PowerPoint Presentation Coach can only detect English, and the possibility of multi-language compatibility is still unknown.

Additionally, today Microsoft is also launching PowerPoint Live for the web. PowerPoint Live lets your viewers watch and engage with your slideshow right from their smartphone, tablet, or computer. To join, they scan a QR code or type in the short link presented at the start of the slideshow. Some notable features of PowerPoint Live include live subtitles available in more than 60 languages, a view counter to know how many people are watching, and a questionnaire that is distributed to the audience at the end of the presentation, for feedback.

After an enthusiastic response from enterprise and education users during the announcement earlier this year, the interactive feature is now available to all Microsoft 365 subscribers. While a subscription is needed to implement PowerPoint Live into your slideshow, it isn't required for audience members.

Twitter is adding voice recording tweets to the official app