After many delays, the Android 11 Beta finally launched last week. While the software already feels relatively stable compared to the earlier developer previews, there are still some quirks that need to be worked out, like video playback problems and mispositioned text entry boxes. One issue won't plague us adventurous beta users any longer: Contactless payments through Google Pay are finally available.

Google Pay support is always spotty on pre-release software due to potentially missing SafetyNet verifications, but Pay already worked on Developer Preview 4 — Google apparently broke something on its end when it started the beta. According to multiple reports from the Android Beta subreddit and some tweets, the problem is now fixed, and Pay is functional for many people again. 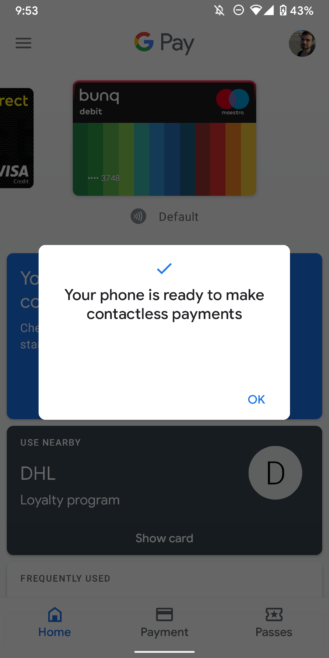 To see if contactless payments are available to you, head to the Google Pay app and tap the Check software button. You should then see a popup telling you that your device is ready for NFC-powered transactions again. If not, try restarting your phone and repeat.

The Fairphone 2, which launched with Android 5 Lollipop, is now getting a 9 Pie beta