Google has silently added Juneteenth to its official US holidays calendar. Also known as Freedom Day or Jubilee Day, Juneteenth commemorates June 19, 1865, the day that the last enslaved Black Americans were freed in all of the US. While emancipation had officially begun in 1863 and the Civil War ended two months prior to Juneteenth, it was not until this day in 1865 that the last slaves were freed from bondage in the state of Texas, where the Union army was slower to arrive in sufficient numbers to enforce Lincoln's famed proclamation.

47 states have recognized Juneteenth as a state holiday or as a day of ceremonial observance, Texas being first in 1980 and others following mostly in the early 2000s. Apple's holiday calendar has also been showing the date for a few years already. Popular recognition of Juneteenth has grown rapidly in the last month, and while it has long been celebrated in the Black community, historical awareness of the holiday among non-Black Americans has been extremely low. During the Black Lives Matter protests of recent years (and especially those of 2020), an increasing association of Juneteenth with the larger BLM movement has emerged.

In addition to adding the date to its calendar, Google has also directed its employees to cancel any unessential meetings on Juneteenth going forward, as Reuters reported last week. According to the outlet, a memo the company sent to its employees reads, "We encourage all Googlers to use this day to create space for learning and reflection, so please don’t schedule any unnecessary meetings. Now, more than ever, it’s important for us to find moments of connection as a community." 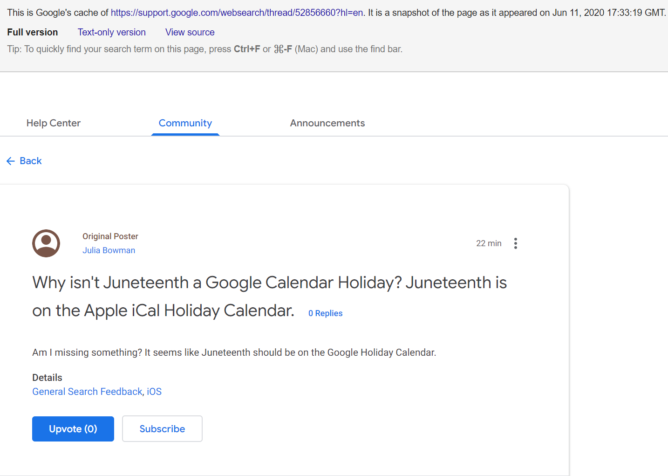 Since deleted question on Juneteenth in Google's support forum from June 11.

Oddly, Google silently deleted a Google support forum thread on why the date isn't available in its calendar, which was created on June 11. It's still the top result when you search for "Juneteenth Google Calendar," a search term that has seen a marked increase in volume in the last few days. 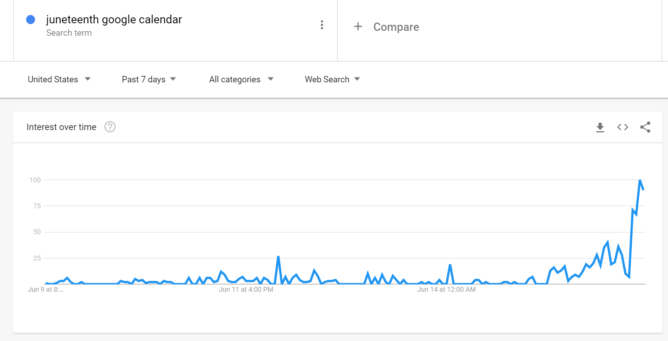 We reached out to Google to ask why the company deleted the thread, but it's probably just routine — the support team often removes questions that aren't relevant any longer, and with the date now being part of Google's holiday calendar, that's the case.

If you're subscribed to the US Google holiday calendar, you should find the date coming up this Friday.

The Android Market is still on the Google Play Store, complete with an app description from 2012