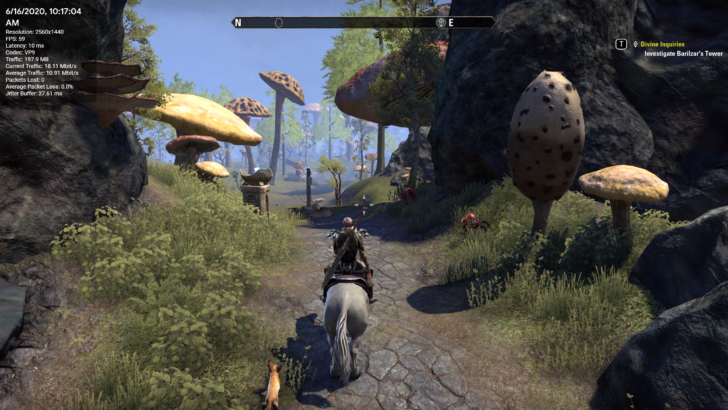 Up until today, ZeniMax hasn't mentioned a word about how the Stadia version of ESO will perform, so pertinent questions about the game's expected resolution and framerate were conveniently never touched upon. Above, you can find a screenshot I took while running the Stadia Plus plugin to show the game's framerate and resolution. The thing is, while Stadia Plus confirms the stream is hitting my monitor at 1440p, the game is extremely blurry (look at the blurry grass and character above).

If I had to hazard a guess, I would say the game is actually being upconverted from 1080p, and even worse, it looks like this blurry stream only supports 30fps (confirmed by the in-game framerate counter in ESO's settings). Now, I would imagine playing on a 1080p monitor will be more palatable, but seeing that I subscribe to Pro for the specific reason of Streaming 4K games, it's incredibly disappointing to see that ESO is a blurry mess on anything above a 1080p monitor. Of course, ESO isn't known for quality optimization, seeing that the game struggles with performance on all platforms, so I suppose the writing was always on the wall for those paying attention.

Outside of the blurry graphics and low framerate, it would appear ZeniMax has delivered in the cross-compatibility department. PC cross-save and cross-play support are included out of the box, and the cross-save support works exactly as expected. Everything I've already purchased on PC is in my Stadia version, so I can totally pick up where I left off, which is great to see.

As far as pricing is concerned, as I already stated, the base game plus the Morrowind expansion are free for all Pro members. Of course, thanks to the stupid way Google chooses to hide prices when you claim free games as a Pro member, it's difficult to tell how much anything costs (fix your store Google). Thankfully someone on the AP writing team hasn't claimed the game yet, and so we know the Standard Edition will run non-Pro members $19.99. Oddly enough, there is a secondary listing for Tamriel Unlimited, which can't be purchased whatsoever, though it's in your library when you're a Pro member that claimed the free version. To make all of this even more confusing, you can also purchase the latest chapter Greymoor for $59.99, and there is even a Greymoor Collector's Edition that will run everyone $79.99, which will net customers extra rewards like exclusive mounts.

So there you have it. The Elder Scrolls Online is officially available on Stadia as of today, and the base game is free for all Pro members. As expected (and most likely the reason ZeniMax never showed off the Stadia version of ESO before release), the game offers a low resolution that's upconverted blurrily if you're a Pro member looking for proper 1440p or 4K support. Still, I have to say the portability the Stadia version of ESO brings to the table is very welcome, and while I doubt I'll play the Stadia release as my primary title, I'm sure Stadia's portability will come in handy when I'm away from my desktop PC.

So if you'd like to grab The Elder Scrolls Online from the Stadia store, or would like to purchase the Greymoor expansion, you can do so through the source links below, just keep in mind you have to be a Stadia member for the links to work.

The Android Market is still on the Google Play Store, complete with an app description from 2012