The Galaxy A10e shares design cues from other budget Android smartphones. The plastic case is coated in a glossy finish, intended to emulate the look and feel of glass, but it just ends up being gross to touch after it collects dirt and smudges — I would have preferred matte plastic. The screen is a 5.83-inch IPS screen, with a resolution of 720 x 1560 and a notch at the top-center. Coming from using a OnePlus 7 Pro, I appreciate how it's a little easier for me to use this phone with one hand. For comparison, it's 0.4 inches shorter than the display on the smallest Galaxy S20 (6.2 inches). I'm not too picky about display panels, but the one on the A10e seems acceptable, with vivid colors and decent contrast. It's not an AMOLED screen though, so you won't get the deep blacks that you would get on phones like the Galaxy A51.

On the bottom of the phone, you get a single speaker, a USB Type-C port, and a headphone jack — nothing out of the ordinary for a phone in the $200 price range. The speaker quality leaves a lot to be desired, with plenty of distortion once you reach high volumes, so you'll probably want to use that headphone jack wherever possible. 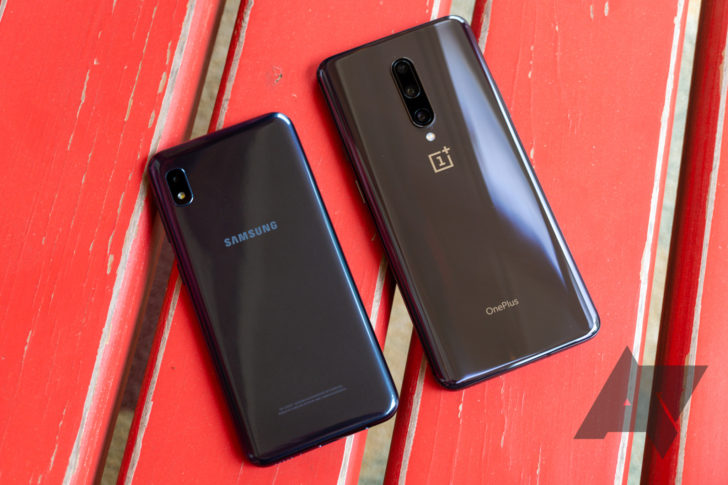 The right side has the volume rocker and power button. I'm not a fan of how close together these controls are, and since they have an identical texture and are surrounded by the glossy slippery plastic, I often turned off the phone by accident while trying to turn the volume down. You'd probably get used to it after a few weeks, but it's still annoying.

The only item on the Galaxy A10's left side is the SIM/SD card slot, which you can use to add up to 512GB of additional storage. However, keep in mind that Samsung disables adoptable storage support, so you can really only use the microSD card for file/media storage.

Speaking of missing features, there are two pieces of hardware that are notably absent from the Galaxy A10e: an NFC chip for contactless payments, and a fingerprint scanner. While it's fairly common for US phones in this price range to skip NFC support, the lack of any fingerprint scanner is more strange. Motorola just released the $199.99 Moto G Fast and $149.99 Moto E, and both phones have fingerprint sensors.

The Galaxy A10e runs Samsung's flavor of Android 9 Pie, also known as One UI 1.1. That means the software experience is fairly similar to what you get on flagship Galaxy S and Note smartphones, minus the features that require specific hardware. There's no Android 10 update yet, but some international models have received the upgrade.

I was happy to see that my unit has been updated to the May 2020 security patch level, so Samsung has kept up with updates since the phone's release — something that isn't incredibly common with budget phones in the US.

This is one of Samsung's few devices in the United States that use the company's own Exynos processors, instead of Qualcomm Snapdragon chips. The Galaxy A10e has an Exynos 7884B SoC, which is about on-par with a Snapdragon 632 in benchmarks. In real-life use, the phone does sometimes take a second or two when opening applications or switching between active apps, but general performance is definitely acceptable for a $200 phone.

It's probably not a surprise that the Galaxy A10e's battery life is excellent, given the low-power processor and 3,000mAh battery back, but I came away impressed. I ended most days with around 50-40% remaining, with my usual mix of checking emails and Slack messages, watching videos, and a little bit of web browsing. Everyone's battery life will be different, but the Galaxy A10e gave me about the same longevity that I get from my OnePlus 7 Pro.

The Galaxy A10e has a single 8MP rear camera, and to be honest, it's not good. There's not enough resolution to create crisp, detailed photos, and Samsung's post-processing usually pumps up the color saturation to unnatural levels. The front camera is acceptable for video chats, though. Poor camera performance is to be expected with phones in this price range, but last year's Moto G7 phones could usually provide sharper photos in our testing.

Maybe. I definitely enjoyed using the Galaxy A10e, thanks to its smaller physical size, great battery life, and lightweight design. The software experience is very close to what you'd get on Samsung's $1,000+ flagship smartphones, and performance was acceptable. It also works on all major US carriers, which is missing from Nokia's budget phones.

However, the lack of NFC support and a fingerprint sensor might be deal-breakers for some people. As previously mentioned, Motorola is now selling phones for less money than the Galaxy A10e that have fingerprint sensors and full support for all US carriers — though you still won't get NFC for contactless payments. The Galaxy A10e also has an extremely poor camera, but you won't get anything significantly better from the competition at this price range.