Google has tried on and off for years to hide full URLs in Chrome's address bar, because apparently long web addresses are scary and evil. Despite the public backlash that came after every previous attempt, Google is pressing on with new plans to hide all parts of web addresses except the domain name.

A few new feature flags have appeared in Chrome's Dev and Canary channels (V85), which modify the appearance and behavior of web addresses in the address bar. The main flag is called "Omnibox UI Hide Steady-State URL Path, Query, and Ref" which hides everything in the current web address except the domain name. For example, "https://www.androidpolice.com/2020/06/07/lenovo-ideapad-flex-5-chromebook-review/" is simply displayed as "androidpolice.com."

There are two additional flags that modify this behavior. One reveals the full address once you hover over the address bar (instead of having to click it), while the other only hides the address bar once you interact with the page. An issue page on the Chromium Bug tracker has also been created for keeping track of the changes, though there aren't any additional details there. 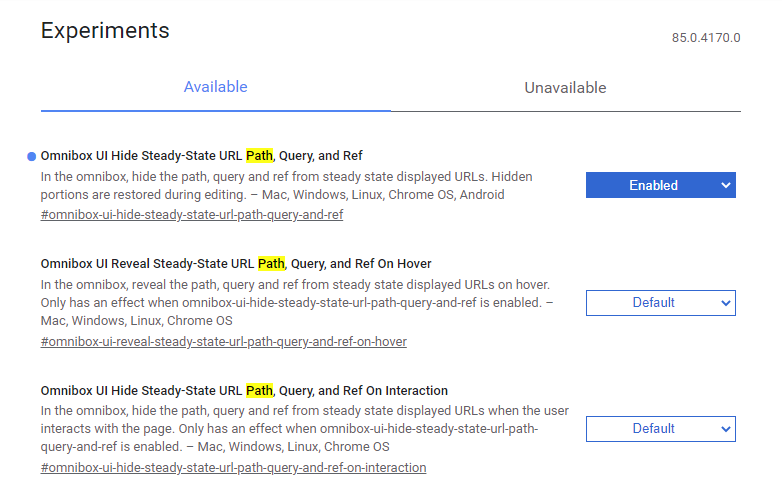 There's no public explanation yet for why Google is pressing ahead with these changes, but the company has said in the past that it believes showing the full address can make it harder to tell if the current site is legitimate. "Showing the full URL may detract from the parts of the URL that are more important to making a security decision on a webpage," Chromium software engineer Livvie Lin said in a design document earlier this year.

However, it's also worth considering that making the web address less important, as this feature does, benefits Google as a company. Google's goal with Accelerated Mobile Pages (AMP) and similar technologies is to keep users on Google-hosted content as much as possible, and Chrome for Android already modifies the address bar on AMP pages to hide that the pages are hosted by Google. Modifying addresses on the desktop is another step towards making them irrelevant, which hurts the decentralized nature of the internet as a whole.

The Chromium issue for the change has attracted a bit of attention, and now Google has clarified how the experiment will work and what opt-out options will be available. See our full coverage here.