Before we dive in, though, there are a few prerequisites you'll need to fill, and some details to keep in mind. For now, the Android 11 Betas are only for late-model Pixel phones. That's the Pixel 2, 3, 3a, and 4 series only. Original Pixels have long since been left behind when it comes to software, and so far, Google doesn't have any other manufacturers on board for these Beta releases.

If you were previously enrolled in the Android 10 Beta Program, that doesn't carry over to Android 11, and you'll need to re-register. However, phones flashed with the Developer Previews seem to be automatically registered into the Beta Program.

Also note that Google is very explicit when it comes to customer support: there are no official support channels for Android 11. This is an adventure, and you're on your own if things go wrong — Pixel support chat probably can't help you.

The steps to install Android 11 aren't too difficult, and Google has made the process astoundingly simple.

1. Visit the Android Beta Program site and scroll down to "Your eligible devices," where you'll see a list of all your compatible phones. (Note that right now the site seems to up and down, switching between the old page that claims the beta program is complete, and the new page that actually lets you register. It may take a few tries, or you may have to wait a bit for that issue to resolve.)

2. Select the phone you'd like to get Android 11 on with the big "Opt in" button. 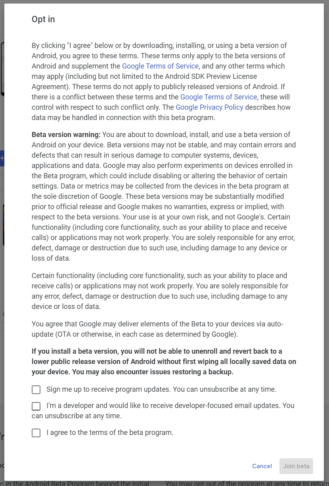 3. You'll need to accept the terms of service, which include a large warning that stuff may be unstable or break at any time. You can also sign up for Beta Program alerts. At a minimum, though, you need to agree to the Beta Program's terms.

4. Once you agree to the terms of the program, click/tap "Join beta." 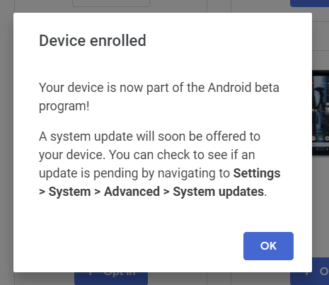 You should see this if your enrollment was successful.

That's it. Your device is now enrolled in the Android 11 Beta Program. You should see an update to Android 11 available on your phone over the next minutes or hours. Google claims it can take up to 24 hours to arrive, but in our experience it's almost always much faster. 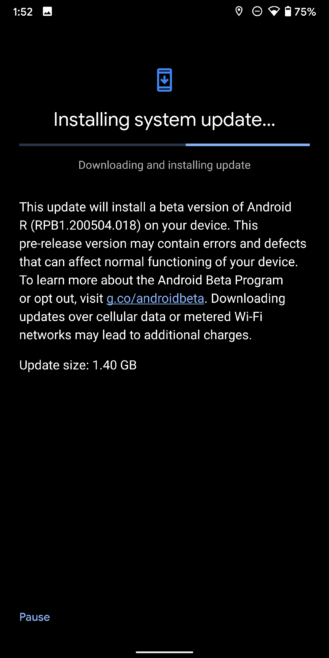 The Android 11 Beta 1 update being delivered to a Pixel 2 XL.

Keep in mind, this is a large update if you weren't on previous Developer Previews, so you'll want to be on Wi-Fi when you pull it down, or risk blowing through well over a gigabyte of data on your mobile plan.

This also isn't the only method for installing Android 11. If you really want to, you can download and manually flash or sideload the factory images or OTAs — though that's a longer and more tedious process, and I'm not sure why you'd want to with this much simpler option available.

For more information on what to expect from Android 11, check out our detailed feature-level series coverage.