The Galaxy A51 is a splendid $400 phone in a time where the cream of the crop tends to float farther and farther out of affordable reach. But Samsung's latest spotlight mid-ranger can be even better with a good ol' price cut. Amazon's got that cut — if you're willing to deal with a few small catches — taking a good $100 and change off its MSRP.

The A51, to us, could stand to challenge the Pixel 4a whenever it comes out. The visuals its cameras capture aren't spectacular, but they're passable on their own and even better with a touch-up or two. The AMOLED display continues to be a bargain for the price and, oh yes, there's a headphone jack as well. Pair that with solid battery life and we've got a good all-rounder. 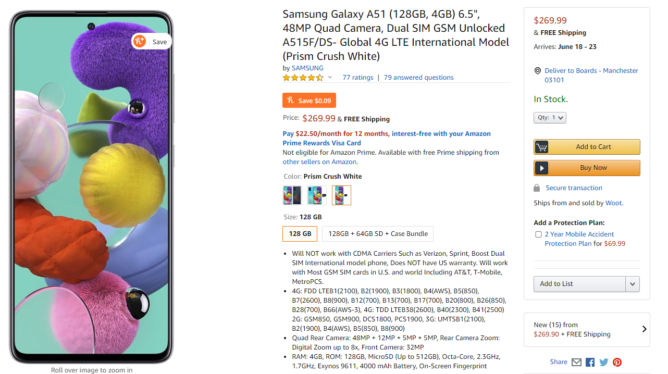 Yesterday, we reported the Galaxy A51 on sale for $289 as one of Amazon's Deals of the Day. But we were later tipped off to an even lower price for the international model of the phone (SM-A515F). It's similarly-equipped in almost every area minus the modem: the phone will work on many major GSM networks worldwide, but unlike the U.S. unlocked model, it won't have access to some supplementary AT&T LTE bands. More importantly for T-Mobile users, you won't get that big reception boost from 600MHz, either.

We do know, though, that our readers like a good deal, so we're letting you know that the A51 in Prism Crush White is available on Amazon as supplied by its subsidiary Woot! for $270, some $130 off its original MSRP. You also have the choice of Crush Black and Crush Blue for $3 or $4 extra.