A few months after Vivaldi for Android hit its first stable build with desktop-like tabs, tracker blocking, and bottom bar navigation, version 3.1 of the browser has been released. It mostly packs minor bug fixes, but hard-core dark mode fans might love the one new addition coming with it: A forced dark theme for website content.

The first Vivaldi release already shipped with a dark mode, but it only worked for the browser's interface and websites with native dark modes. The latest version adds an option to dip any website into an eye-soothing black color, though when I tested the feature, I ran into a few problems: Websites with native dark themes appeared to be partially broken — a few icons and borders on Android Police's dark mode are miscolored, for example. Vivaldi has even more trouble inverting websites with heavy CSS customizations, like android.com, where some text would disappear due to being white on white. It works well enough for news sites with light themes only, though. 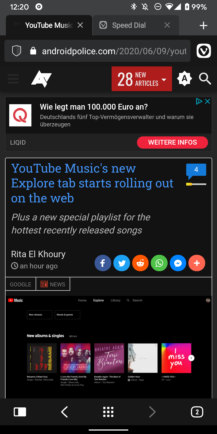 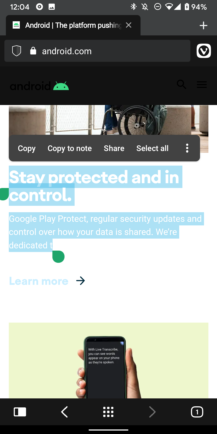 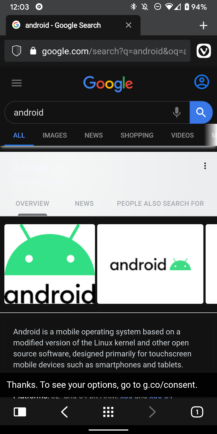 When dark mode works, it's great, but often enough, the results are sub-par.

To activate dark mode for all web pages, head to settings via the Vivaldi icon in the browser's top right corner, look for Themes, and toggle on Dark mode for Web Pages. There's no option to use on individual websites only, unfortunately. The feature is live in version 3.1, which is currently rolling out to the Play Store. If it's not available to you yet, you can also get it from APK Mirror.

Google Docs, Sheets, and Slides now show whether your file is saved online or locally

eBay's dark mode is official, rolling out to everyone through July