One of the headlining features this release brings to Gear S3 owners is the Bixby assistant, ahead of the impending S-Voice shutdown. Laugh all you want, but while you're getting in a good chuckle, I'll be telling my Bixby-enabled watch to start a workout routine with specific goals. Can Wear OS do that? Checkmate, Google. Basic Bixby things like reminders and answering questions should also be supported. 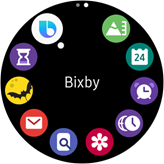 This update also brings a couple improvements to the watch's fitness capabilities. When you want to work out with your watch, you now have the choice to keep the screen on during the session, although this will drain the battery faster. Samsung has also added support for tracking laps during workouts. Pressing the back key twice will mark when one lap ends and the new one begins.

There are a number of other quality-of-life improvements packed in the update as well, even if none of them are as groundbreaking as Bixby support. One of these is the ability to check the battery level of connected earbuds from the Quick Panel of the watch, though the only earbuds supported are the Galaxy Buds and Icon X. The always on display will now show off the current battery level while charging, too. And finally, if the rotary app launcher that takes advantage of the circular display isn't your thing, there's a new option to set the launcher to list view, where apps will be displayed in a simpler list layout.

Smartwatches may not be the big new thing they once were, but it's nice to see that Samsung is still working on improving the experience customers have with their products, especially devices that are almost four years old now. To get the update pushed to your watch, make sure it's connected to Wi-Fi or a cellular connection, and that the battery is fully charged up, then head to the Settings and check for the update.

Verizon reports that the OTA started rolling out yesterday, though Samsung may deploy it in stages, so if you don't see it yet, just hold tight.