Over the weekend, Google tweaked and subsequently reverted a change to its Assistant developer documentation. Two ostensibly "new" device types were added to its list: doorbells and stylers. Note, neither of these are actually new, and Assistant-integrated products in both categories already exist. We're pretty sure Google simply leaked developer- and manufacturer-facing documentation for the two categories that wasn't previously public.

Fun fact: As of right now, Google doesn't list doorbells as a supported device type in its Smart Home Device Types developer documentation at all. All we can really infer from this change spotted over the weekend is that, if Google is documenting details for how doorbells work in a way it wasn't previously, the company may be opening up how doorbells can be used by developers in their own Assistant-integrated Actions and services, or potentially expanding which companies will be allowed to make their own products in those categories. For all we know, it's possible Assistant-powered doorbells may also be picking up some new features, but that's conjecture. 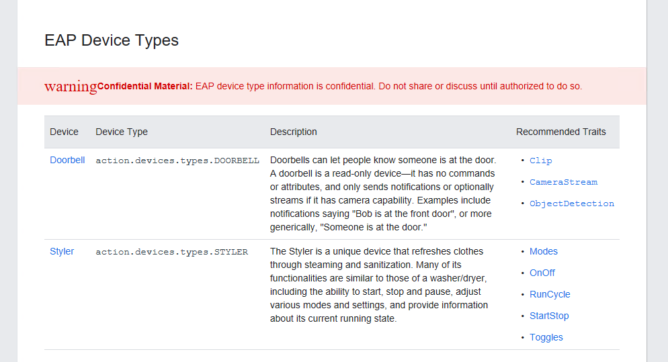 If you aren't familiar, a "styler" is a sort of high-end clothes cleaner you can use for things that can't just be tossed in a washing machine, or to stretch out the time between dry cleanings. Often they use steam to sanitize a garment without actually washing it in the traditional sense. And again, existing products like the LG Styler already claim to work with the Assistant. As with the doorbells, we're pretty sure that the changes spotted over the weekend simply have to do with how developers can integrate them into their own stuff, or potentially opening up which companies can make them.

The changes we spotted over the weekend were marked as "EAP," which means early access program, and were labeled as confidential. Google must have accidentally pushed details it meant to share with just a handful of developers public — oops. Maybe we'll hear more if and when the early access program ends.