Last year, Google announced the beta release of Currents. You'd be forgiven for not having a clue what that is, as the company hasn't exactly advertised it since, but it's the enterprise replacement/successor for Google+, so us regular folks don't get to use it anyway. Still, Google has been working on the new business social network for a year now and deems it stable enough to migrate G Suite Google+ users over starting July 6, 2020, as the company announced in an email to administrators.

While there are some visual changes, Currents is still Google+ at its core, leaving us wondering why Google even had to introduce a new product to replace its social network. Starting July 6, the Google+ app will be updated to Currents. All existing plus.google.com links will continue working, being redirected to currents.google.com. The same is true for content a company currently hosts on Google+ — everything will be transitioned over, including posts, comments, likes, and people you follow. 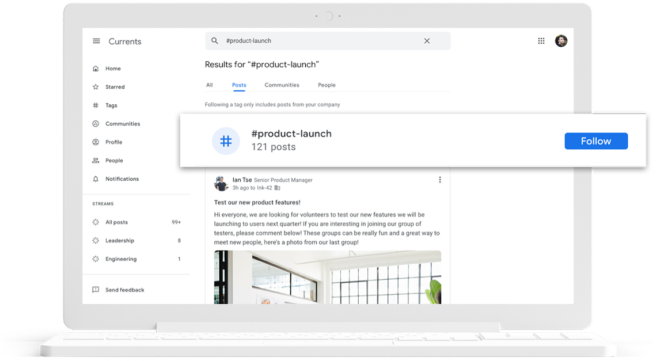 Other than the new white interface, Currents does offer a few new features, making the business focus more apparent. There are now streams, which are basically channels meant to organize topics. Google gives announcements, help desks, and fun-based things like pets and wellness as examples. There are also post analytics, which allows you to see a breakdown of views, comments, reshares, and likes on what you've posted. Google+ collections will be removed, and all posts within them will be grouped with a system-generated tag. Public communities that aren't part of a domain will be deleted altogether.