Ever since it released the first TicWatch back in 2017, Mobvoi has been making affordable accessories that promise high-quality features at low costs. Earlier this year, it released the TicPods 2 series to fairly solid reviews. Now the manufacturer is expanding its range of audio products with the TicPods ANC, silicone-tipped Bluetooth earbuds with active noise cancellation.

The TicPods ANC's main selling point is, of course, the active noise cancellation. The company says that TicPods ANC users will be able to opt between full noise cancellation, Sound-Passthrough Mode (SPM), which will allow users to hear what’s going on around them, and turning ANC off. Switching between these three is done via a hardware button.

One nice quality-of-life improvement is that both the left and right earbuds of the TicPods ANC connect independently to the audio source, so you can use either bud separately instead of being limited to the master bud like many other cheap Bluetooth earbuds. The silicone tips should provide good noise isolation, and are also nice for those of us who with ears that hate hard plastic. Mobvoi also says it has re-engineered its charging case so it’s more round, unlike the oval shape of its previous pods, so that it can be slipped into your pocket more easily. 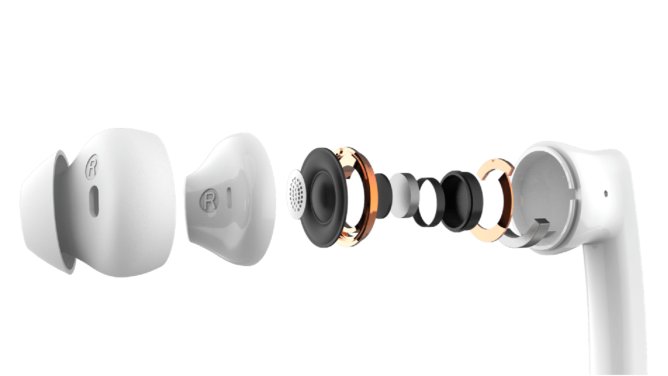 Battery life isn't a strong point, but should provide an acceptable 5 hours of playback with ANC disabled. It drops down to 4.5 hours when the feature engaged. The charging case holds two full charges, so we're looking at up to 15 hours of continuous play between the pods and the charging case. There's no quick charge here though, and it will take over an hour to completely recharge the buds. At least they support USB-C charging.

The TicPods ANC do support some touch controls, like play/pause and summoning your voice assistant of choice, but they lack the Tickle feature that allowed the previous TicPods to change volume levels by swiping up or down. That was one of my favorite features of the first-gen TicPods Free, so it's a shame to see it disappear from this model.

Mobvoi’s TicPods ANC are available to pre-order today for 10% off their MSRP. On June 10th, they will start shipping from Amazon and Mobvoi for $90. And if you want a new watch to go with them, Mobvoi's first-gen TicWatch E is currently on sale for just $80.