Google Search will soon start to highlight snippet text from results on the web pages you click. If that doesn't immediately sound like the greatest thing since sliced bread, stick around, because I think you'll actually love this simple new feature from the Chromium team.

Have you ever searched for a specific phrase or term on Google, seen it highlighted in the result snippet in the search results, clicked, and then been totally unable to find it on the web page itself? It's a problem as old as search engines themselves, and most of us get around it by using the even-more-ancient ritual of 'ctrl+F,' essentially searching a second time for the thing Google already found for us. It's needlessly repetitive, but we've all just kind of sucked it up and dealt with it for years, because that's how you Computer. With the rise of smartphones, though, this problem has become considerably more annoying. Getting to the find menu in a mobile browser often feels like more trouble than it's worth, and the reduced real estate of your phone's display can make actually finding the relevant text a bit challenging. Enter a new feature called, well, it doesn't really have a name—but let's go with URL text fragments.

Let's say you're doing a search on Google, and you search for an exact phrase (it's not necessary, but helpful to our example).

The text "Subscribe to Android Police's weekly newsletter" appears in your first result. But when you click that link, the exact text might proven hard to find without using your old friend ctrl+F. Now, Google Search will actually highlight and bold the text snippet that appeared in the search result for the link you clicked, as shown in the second image below. 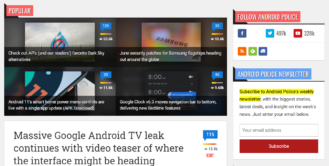 The way it's achieve this is through URL text fragments, which you can see the formatting of in the box below.

The creator of this tool has a huge writeup on GitHub with all the various source code, and it was first added to Chrome in the Canary channel over a year ago. Now it seems Google is slowly rolling out this feature that leverages it to some users in Google Search. For now, URL text fragments are supported by Chrome only, but there's no reason other browsers can't add support for it down the road (and they really should).

The obvious next step here is being able to highlight page text and then auto-generate one of these text fragment URLs so you can highlight text in shared links, and I suspect if there isn't already, a Chrome extension will appear relatively soon that does just that. Eventually, I'm sure Chrome itself is likely to add this as a native browser feature, because it just makes so much sense. URL text fragments can also support complex things like highlighting multiple sections or highlighting a specific term of set of terms every time they appear on a page. For now, it looks like the Search implementation is just highlighting the relevant result's snippet, though I could see Google tweaking this behavior for things like exact phrase searches to act more like an automatic ctrl+F (which is already part of this feature). According to the GitHub page, this feature doesn't bundle in support for automatically jumping to the highlighted text, and the author says that this should be left up to the browser in terms of how that experience works.

For the time being, it looks like we're just seeing the earliest implementation of what could become a pretty powerful search and sharing tool. It was bundled into Chrome stable back when 80 came out in February, apparently, it's just that Google's search team has only now gotten around to rolling out a feature that takes advantage of it.

Chrome 85 will make drag and drop uploads much less frustrating