Google decided some time ago that the power button on Android phones could be useful for quick access to commonly-used features. An iOS-style wallet was added to the Pixel in March so you can switch between payment cards or bring up travel passes and loyalty cards when you need them, and next on the list is smart home controls. Evidence of this arrived with Android 11's developer previews, but freshly leaked documentation now shows us what the final product is going to look like.

When we saw an early version of the power menu's home control center, the usual buttons such as Emergency and Power off were moved to the very top, and everything below was reserved for 'Quick controls.' With the wallet functionality since released, Google had to find a way to fit it all in, and the below image shows what they've likely settled on. The quality isn't the best, but the mockup taken from a leaked "Android R changes" document reveals that Google will be cramming the card switcher in between power options and quick controls.

The end result is a very busy screen, but a useful one nonetheless. If we're lucky, this will eventually have a contextual element — it would be great if the wallet was only displayed when you weren't at home, for example, allowing more smart home controls onto the screen when you need them the most. Another image from the leaked materials shows what the different states of IoT buttons will look like (below). 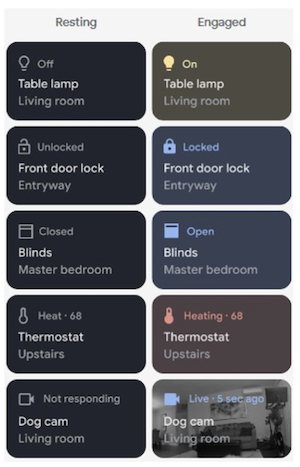 This gives us a good idea of which smart home gadgets will be controllable, including cameras, thermostats, and lights just as you'd expect. According to the documentation, short presses will toggle these on and off, while a long-press will bring up more options or take you to the corresponding app if necessary. It's unclear whether this will be completely tied to the Google Home app, or if you'll be able to add other unattached services. We were expecting to get more official details about Android 11 in a livestreamed Beta Launch Show on June 3, but that's now being postponed to a later date.