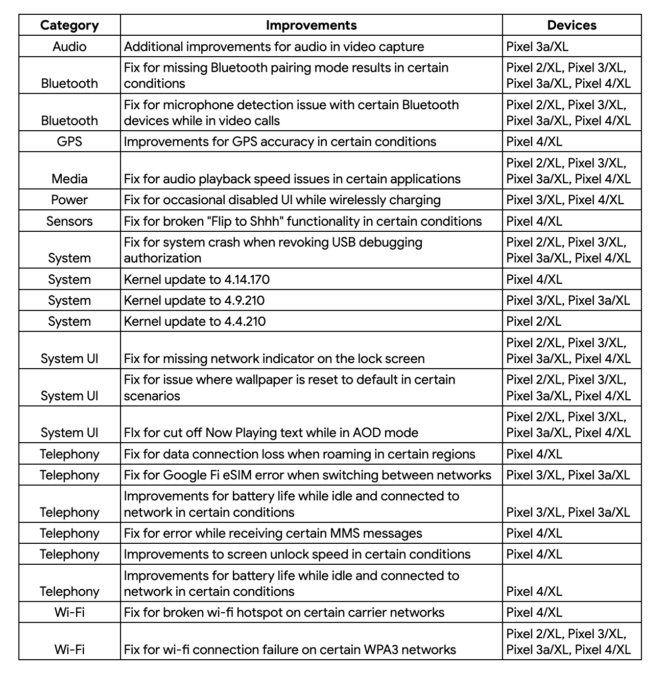 Apart from kernel version updates for each device, every change in the Pixel patch notes is a "fix" or "improvement" meant to mitigate some specific issue, sometimes just for one set of phones, and there are no new features here. Most of the changes are very specific, but you can look forward to improved audio in videos recorded on the Pixel 3a and 3a XL, plus some Wi-Fi and Bluetooth enhancements, among other fixes.

This month, Telstra subscribers get a separate build all of their own for each phone. The security bulletin for June 2020 is also on the bigger side, between the Pixel-specific fixes and general Android security patches, so it's in your best interests to pull it down soon, if the Feature Drop changes didn't already have you excited.

This quarter's Feature Drop is a bit lighter on new features than the last two were, but you can expect some Adaptive Battery improvements to stretch out battery life even longer, plus new features for Recorder, bedtime stuff in the Clock app, and a new "safety check" feature via the Personal Safety app, among other tweaks. Note that previously, not all Feature Drop changes were delivered via the monthly update. Some changes will probably arrive via apps or server-side tweaks over time.

Full factory and sideloadable OTA images are already live and available to download at your pleasure, and the update should be landing on your Pixel 2, Pixel 2 XL, Pixel 3, Pixel 3 XL, Pixel 3a, Pixel 3a XL, Pixel 4, or Pixel 4 XL soon. We should also note, some of our readers with a Pixel 2 XL are having issues flashing the OTA image that Google published with a timestamp error. We've reached out to Google, and the company is looking into it.