Twitter is making it easier to manage your tweets and replies before you're ready to send them out. The company has announced that its web app now supports saving drafts and scheduling tweets for a later time, something that's only been available through third-party services or Twitter for Business earlier.

Not quite ready to send that Tweet? Now on https://t.co/fuPJa36kt0 you can save it as a draft or schedule it to send at a specific time –– all from the Tweet composer! pic.twitter.com/d89ESgVZal

You can access both functions via the blue compose button in the left sidebar of the desktop version or bottom right corner of the mobile view. In there, you'll notice a new calendar and clock icon, which allows you to schedule tweets. When you hit the back button while composing a tweet, the website will ask you whether you want to save or discard it. Should you choose the former, you'll have access to the draft via a new "Unsent Tweets" button up top. You'll see an overview of all unfinished tweets when you head there, next to a "Scheduled" section. 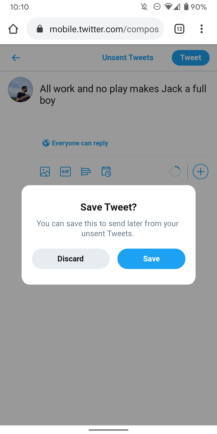 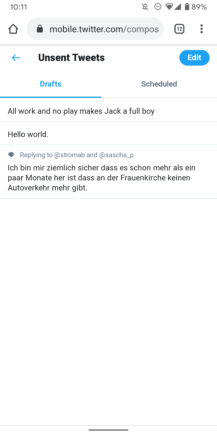 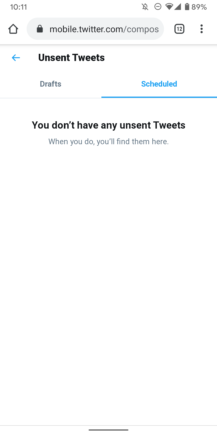 Unfortunately, it seems like there's no way to delete a draft once you've saved it. When I tried to edit it and exit via "discard," the draft still remained in the overview. Twitter also shared that for now, drafts won't sync with the Android and iOS apps, so there's still some work left until the feature is fully polished.